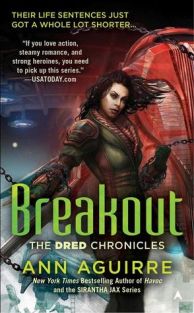 The Overview: The prison ship Perdition has become a post-battle charnel house with only a handful of Dred’s soldiers still standing and now being hunted by Silence’s trained tongueless assassins. Forging an uneasy alliance with mercenary commander Vost—who is their only chance at escape—the Dread Queen will do whatever it takes to end her life sentence on Perdition and keep the survivors alive long enough to cobble together a transport capable of getting them off station. If Dred and her crew can win the deadly game of cat and mouse, the payoff is not only life but freedom—a prize sweeter than their wildest dreams. Yet the sadistic Silence would rather destroy Perdition than let a single soul slip from her grasp…

Ann Aguirre is easily one of my all-time favorite authors. I fell in love with her Grimspace series, and am beginning to love this one just as much! I love the concept of the story, the characters, the setting, and the action! I just started reading the second book in this series, and I’m going to have to pace myself because August is really far away! If you’re in the mood for Science Fiction, Urban Fantasy, or even Dystopian, The Dred Chronicles managed to hit the spot for all of them.

What are you waiting on?