In case you missed my Introductory Post, my world was in such an upheaval that I was forced to take drastic measures by simplifying and organizing all the things that caused me stress. Each month, in 2017, I’m tackling different aspects of my life that are clutter-stressors by organizing and altering them into things that bring me joy.

2017 seems to be the year of personal revelations. Each month, I’ve been tackling things that caused me stress and turning them into things that bring me joy. Health has always been important to me, and this Simplifying Life project has really helped me set (and achieve) attainable goals. A lot of work went into it though, so it’s important for me to clarify that the simplification comes in the form of having set goals so I don’t have to stress about what I should be doing.

Disclaimer: I’m going to be bringing up a lot of health “facts” that I’ve read while doing research and am using as a basis for all of my personal health goals. I’m mentioning them merely to explain why I started doing the things I am to get healthier, not as a means to inform or educate. Heck, I’m not even standing by them as accurate, so please take everything I say with a grain of salt and do your own research before following suit.

There’s something irreplaceably helpful about being able to see progress in the form of checkmarks all over my health tracker. I began this journey by identifying the physical and emotional components that go into making me healthier, happier person. I created an Excel template with all of these items and set a daily checkmark goal. 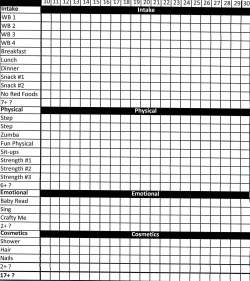 I felt my health tracker should include more than just eating and exercising, but also things that bring me emotional joy and, oddly enough, personal hygiene. I noticed that when I took the time to curl and style my hair in the mornings, I had a much more productive day. Maybe it’s because I felt like I had my “armor” on and was ready to face the world, more so than when I just tromped to work with my hair up in a messy bun. Whatever the reason, all of these things helped me feel healthier. I found this tracker incredibly motivational. Every time I felt the need to do something, I’d pick an item and see it through (most of which took under 5 minutes). I used this tracker for several months before getting into enough of a habit that I didn’t need it anymore.

I consider it almost impossible to change your diet overnight. I talked about this a little bit in my Simplifying Life: Food post, but I really think if I had started trying to eat healthier all at once, it would’ve been doomed for failure. Instead, what I did was look up foods good for your brain and slowly start incorporating them into my diet. Over the course of a couple of years, I have slowly change my habits so that I’m buying less processed foods and more fresh foods. They say when you go to the grocery store, try to shop more on the perimeter rather than in the aisles to avoid processed foods. So far in 2017, I stuck to the edges, only venturing in occasionally for cereal (my true <3) and peanut butter.

Another thing I wanted to track was my Saturated Fat intake. I remember reading somewhere that 30% of your daily intake should include fats, but only a small fraction of that should be Saturated Fats (for me, it was about 13g to 15g per day) and 0% Trans Fats. The trouble is, I had no idea what I was actually consuming. Part of my motivation was a couple of documentaries I’d watched on Alzheimer’s disease. In one Ted Talk, a doctor claimed his research showed people had a much higher likelihood of experiencing Dementia and Alzheimer’s if you ate more than 20+ grams of Saturated Fats per day. The research he presented showed a strong correlation between the two, however, I am always skeptical when data is thrown in front of my face. I haven’t done any research to see how thorough their experiment was, nor have I done any to see if anyone else has substantiated this claim. That said, it got me thinking that, regardless of Saturated Fat’s effect on Alzheimer’s, it’s probably not a bad idea to start paying attention to how much I’m getting.

Now, I considered myself a fairly healthy eater. I don’t indulge in candy bars, ice cream, or most other processed foods very often. But, as soon as I started reading labels and tracking consumption, I discovered I was still well above my daily Saturated Fat intake goals. For example, my coworkers always bring in these frosted shortbread cookies, and I’d always just figured they had a lot of sugar, but not much else. I’d eat two, sometimes three every time. Come to find out that each cookie also had 8g of Saturated Fat! O_o! After two cookies, I had totally blown my Saturated Fat intake for the day. And I really don’t even like them that much – I just ate them because they were available. It’s all about choices. And becoming aware of what you’re putting into your body. I decided I would much rather indulge in a giant bowl of natural chocolate ice cream at the end of the day than waste it all on a tiny cookie at lunch. I digress…

There are a ton of cute meal trackers on the internet for this (google it). Mine are “fugly but functional.” 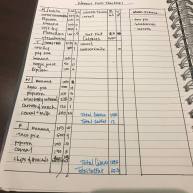 I noticed when I was doing my general health tracker that it was always a lot more fun to rack up steps than it was to do strength training. It also was a lot easier to find data on calories burned based on steps taken rather than individual strength training (I’m antsy in general). According to the research I found (don’t quote me), walking 10,000 steps per day (provided at least a half-hour of those steps is a more rigorous workout) burns about 500 calories. After 7 days of this, you’re conceivably losing 3500 calories, or 1 pound. Now, all of this depends on how many calories your body needs to maintain its current weight, so you can’t just eat what you want, burn 3500 cal, and expect to lose weight. It’s a math game, and every person is different. Anyway, this seemed like a goal I could really get behind because I’ve been enjoying running lately, it’s beautiful weather outside, and it keeps me from feeling so sedentary. I have a nifty little app that helps me track my steps, but I’m looking into getting a fitbit so I don’t always have to have my phone on me.

I also remember reading somewhere that sitting for more than 2 hours a day straight negates any health benefits gained from eating well and exercising. The 10,000 steps keeps me up and moving, and as an added benefit keeps me from wearing out my eyes staring at a computer screen for too long. I just need to apologize to the people in the office directly below mine because I’m now clomping around so much…

All of these health goals involving food are absolutely redundant if you don’t make sure they are available. If you’re at home and all there is to eat is junk food, then you have only two choices: break your health goal and feel guilty about it, or starve. I can eat good foods all day every day if they are available, but the moment I get lazy (by not going to the store or prepping produce), that’s when I revert back towards eating poorly.

Now, this is usually the point where I list all the goals I achieved, but in the case of health, the endgame is longevity. I’m hoping the good habits I’m getting into now and the lifestyle changes I’ve been slowly making over the last three or four years will pay dividends as I get older. I can tell you one thing, because I’ve started tracking numbers and setting daily goals, I feel amazing and have stopped worrying so much about what the future holds. So, in that sense, I have successfully reduced my stress in both my current and future health situations, and that, in itself is a win!