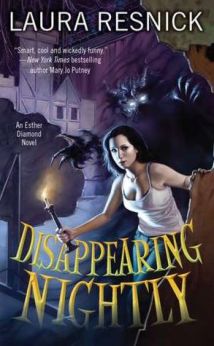 The Overview: I’m not a heroine — I just play one. Also psychotics, vamps, orphans, hookers, housewives and — on one memorable occasion — a singing rutabaga. It was never my ambition to utilize my extensive dramatic training by playing a musical vegetable. However, as my agent is fond of pointing out, there are more actors in New York than there are people in most other cities. Translation: Beggars can’t be choosers.

This explains how I wound up painting my body green and prancing around stage half-naked the night Golly Gee, the female lead in the off-broadway show “Sorcerer!” disappeared into thin air. Literally. Now other performers are also vanishing, and a mysterious stranger is warning me: There is evil among us. But the producers want me to take over Golly’s part. Looks like I’m going to need a little magical help if I want to keep my starring role . . .

I have to say that I was really looking forward to reading this one, so it’s a bit disappointing that I found it a bit lacking. I now understand why the publishers were willing to put out books 2-5 before releasing it.

The whole thing was just… okay. The writing style was decent in the sense that I didn’t notice any flaws, and the basic plot was even a good one. Honestly, my main complaint was with some storyline decisions. There were just too many ridiculous and far-fetched elements for me to really enjoy it. I’m not even referring to the bizarre things that make Piers Anthony and Terry Pratchett so successful either. It was more of a bad series of decision that came across cliché and overdone. Now I’m not averse to whimsy in urban fantasies (and in fact expect a little), I even went with it at first, but Resnick lost me when she brought in the drag queens and condom-selling cowboys. It just went too far, especially since there are so many other fantasies out there that merge eccentric and mystery quite well (see list below).

My other complaint was characterization. There were a few really good characters that I definitely want to read more about, but for every one good character, there were five others that needed some work. You’ve probably gleaned from my mention of queens and cowboys that there were a lot of stereotypical fillers in this book. What’s sad is that she didn’t need them. If she had just taken the time to develop a well-rounded character in place of a couple of the fillers the story would’ve been a lot less silly and a whole lot more compelling.

I don’t usually post negative reviews, as I usually prefer to focus on the books I find recommend-worthy. The reason I made an exception here is that I’m almost positive I’m going to read the second book. I know that sounds odd, but based on the backwards publication circumstances of this novel, along with the promise I see in the story and the writing, I’m completely willing to make an exception to give the author a second chance. I guess we’ll all find out soon if the second book is any better (unless someone out there wants to save me some time by providing some feedback…).