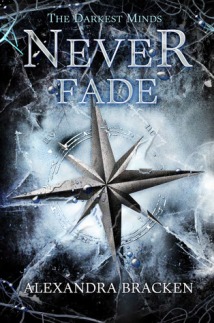 The Overview: Ruby never asked for the abilities that almost cost her her life. Now she must call upon them on a daily basis, leading dangerous missions to bring down a corrupt government and breaking into the minds of her enemies. Other kids in the Children’s League call Ruby “Leader”, but she knows what she really is: a monster.

When Ruby is entrusted with an explosive secret, she must embark on her most dangerous mission yet: leaving the Children’s League behind. Crucial information about the disease that killed most of America’s children—and turned Ruby and the others who lived into feared and hated outcasts—has survived every attempt to destroy it. But the truth is only saved in one place: a flashdrive in the hands of Liam Stewart, the boy Ruby once believed was her future—and who now wouldn’t recognize her.  As Ruby sets out across a desperate, lawless country to find Liam—and answers about the catastrophe that has ripped both her life and America apart—she is torn between old friends and the promise she made to serve the League. Ruby will do anything to protect the people she loves. But what if winning the war means losing herself?

I’m sure I mentioned in my review of The Darkest Minds that I was unsure if I wanted to continue reading. It wasn’t for the hope that things would get better – she took that away completely at the end of the first book. No, what’s kept me reading was the pure appreciation of the side characters. They were vibrant, interesting, and I was excited enough about them to want to see where they ended up. I also liked the main character, but I think certain plot ideas got in the way of her relatability (I’ll talk more about that below). Let me just say this: these are some of the best characters I’ve read all year, and I could definitely learn a thing or two by studying this for my own writing.

So, now that I’ve established how much I love these characters and how brilliant I think the author is at creating them, I’d like to talk a little bit about the things that are keeping this series from being outstanding. At least in my eyes.

The only thing that consistently brings the ratings down for these books is story. In book one, the author left the characters, and therefore the readers, without any hope. It didn’t really give me anything to look forward to in Never Fade and, frankly, I had a hard time deciding whether or not I wanted to read it. While the second one inspired more hope (and convinced me I want to see where the story ends), it still had some story elements that put me off.

For example, I found myself constantly questioning the rationale of the main character. Her decisions often didn’t make any sense. It was almost like the author didn’t know how else to get the story where she needed it to go, so she made it convenient for herself by making the protagonist responsible for the new directions. As a result, the main character came off as highly illogical, unsentimental, and by extension, less relatable. When people have very little, they tend to cling to it more fiercely. Several times throughout the story, the main character went against this norm, pushing away everything she had with no solid reasons for doing so. It might have worked if those odd decisions actually accomplished anything, but all it ended up doing was stirring up senseless turmoil and make her difficult to support.

Overall, I see where Bracken was trying to take the story, and even like the ideas behind it, I think she just could have chosen a better way to get there. It is still an enjoyable series, but I just can’t help but see the opportunities where it could have been stronger.

Recommendations: as far as teen dystopian’s go, this isn’t one of my favorites based on concept and story alone. However, it has superb characters and includes one of the best naturally developing love stories I’ve ever read in a teen novel. I would probably recommend this only if you’ve already read (and enjoyed) my five favorite dystopians below. A warning to the wary, this particular teen book contains an exorbitant amount of language… perhaps a fair bit of violence, too.

The Hunger Games by Suzanne Collins