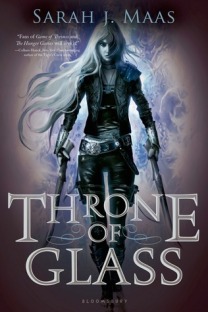 The Overview: In a land without magic, where the king rules with an iron hand, an assassin is summoned to the castle. She comes not to kill the king, but to win her freedom. If she defeats twenty-three killers, thieves, and warriors in a competition, she is released from prison to serve as the king’s champion. Her name is Celaena Sardothien.  The Crown Prince will provoke her. The Captain of the Guard will protect her. But something evil dwells in the castle of glass–and it’s there to kill. When her competitors start dying one by one, Celaena’s fight for freedom becomes a fight for survival, and a desperate quest to root out the evil before it destroys her world.

I had Throne of Glass recommended to me at least a dozen times on the blogosphere, and once one of my favorite go-to girls for book recommends started raving about it I knew I couldn’t wait any longer to read it. And I’m really glad I did – I was hooked from the very beginning! It reminded me right a way of Maria Snyder’s Poison Study, and I actually found I liked it a little better (although I will admit I have not read beyond book one of either series, so the jury is still out on which one I’ll end up liking more).

While I enjoyed Throne of Glass thoroughly, it did have a couple of flaws, most of which center around characterization. The heroine, Celaena, was blatantly inconsistent throughout the novel and I never really felt emotionally connected to her. For one thing, she is supposedly an exceptional assassin but not once during the entire novel that she ever show off those skills. She also never dealt with the emotional fallout that I imagine a normal person would go through after enduring a year at a prisoner mining camp.

While a bit odd, those two elements didn’t bother me too much while I was reading. What did bother me was that Celaena’s actions often didn’t match up with her thoughts. During her POVs, she would think and feel certain things but would never show them. It made her come across as impartial during scenes that I felt were supposed to be the most emotionally evoking. She was just too casual about things that would ruin my whole day if they were happening to me. The thing is, I wish I knew why. I got a little insight to the inner workings of her mind, but never quite enough to see reasonings behind some of her behavior. This more than anything else kept me from feeling totally invested in her story. All I have to say is, thank goodness for the love interests because without their POVs, the novel wouldn’t have been nearly as enjoyable.

Despite the inconsistencies, there were still a few things I liked about the main heroine. She was confident without being cocky, highly skilled without being infallible, and sharp without being brilliant (she did, after all, have a difficult time watching what she said). I also really loved her progression through the competition to become the king’s assassin. It was a cool way to see the characters behave under pressure, and was really fun to read about. Those of you who follow my blog regularly know how much of a sucker I am for a good competition and this was one of the best ones I’ve read in years.

Overall, I really enjoyed this novel and look forward to reading both Crown of Midnight and The Assassin’s Blade within the next couple of months. I imagine the few issues I had with this first book will work themselves out as the series continues (hopefully).

Recommended Reading: I feel as though this is the start of what could be a killer series and would recommend it to any fan of teen fantasy. Despite its flaws, it promises to only get better from here.