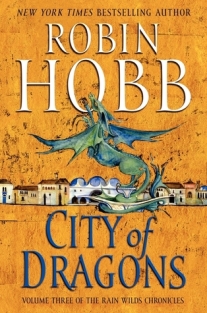 The Overview: Once, dragons ruled the Rain Wilds, tended by privileged human servants known as Elderlings. But a series of cataclysmic eruptions nearly drove these magnificent creatures to extinction. Born weak and deformed, the last of their kind had one hope for survival: to return to their ancient city of Kelsingra. Accompanied by a disparate crew of untested young keepers, the dragons embarked on a harsh journey into the unknown along the toxic Rain Wild River. Battling starvation, a hostile climate, and treacherous enemies, dragons and humans began to forge magical connections, bonds that have wrought astonishing transformations for them all. And though Kelsingra is finally near, their odyssey has only begun.Because of the swollen waters of the Rain Wild River, the lost city can be reached only by flight—a test of endurance and skill beyond the stunted dragons’ strength. Venturing across the swift-running river in tiny boats, the dragon scholar Alise and a handful of keepers discover a world far different from anything they have ever known or imagined. Immense, ornate structures of black stone veined with silver and lifelike stone statues line the silent, eerily empty streets. Yet what are the whispers they hear, the shadows of voices and bursts of light that flutter and are gone? And why do they feel as if eyes are watching them? The dragons must plumb the depths of their ancestral memories to help them take flight and unlock the secrets buried in Kelsingra. But enemies driven by greed and dark desires are approaching. Time is running out, not only for the dragons but for their human keepers as well.

I talk about Robin Hobb as often as I can! Her books contain everything I love about fantasy – great characters, epic world building, engaging conflict, effortless writing, and dragons! While Kim Harrison is my go-to author for urban fantasy, Robin Hobb is definitely my go-to for high fantasy. I can always count on Hobb to deliver a meaningful, entertaining story. I’ve been slowly working my way through all of her books for the last five years. The trouble is, I’m almost caught up and that horrifies me. All I’m saying is, thank goodness she has a new series coming out in August (The Fitz and the Fool).

City of Dragons is the point when readers start discovering answers to questions that have been built over the entire saga. What’s more, the answers to most of those questions revolve around dragons! And fabulous dragons, at that – they have distinct personalities, always behaving exactly how I think dragon should. Even when the story jumps into a dragon’s POV, you can tell there’s nothing human about them – it’s excellent! The good news is, these are some of the best dragon books out there (in my opinion), the bad news is, I don’t often recommend them for the dragon appeal because dragons don’t play a huge role until later in the saga (though they are still integral to the plot). They’re worth reading, though, because part of the magic is the momentum–building throughout several trilogies, which makes the bits I’m reading now so much feel absolutely epic!

The dragons are great, there’s no doubt about that, but the human characters are what pull me in emotionally and make Hobb’s books so absorbing. Each characters has such strong, compelling conflicts that it’s impossible not to become involved with their individual stories. I’m particularly happy in this novel that we got a chance to read more about Malta and Selden – characters I don’t think we’ve seen since the Liveship trilogy. Good storytelling for me is seeing characters tackle challenges and overcome them, and Hobb’s books have that in abundance. While the most evoking challenges take place on a personal level, the external conflicts in this series are just as strong. Hobb is so conscious of what’s happening in this world on a global scale that it makes everything so much more integrated and realistic. When things that are happening to the characters affect cities half a continent away, it adds a level of complexity and dynamics to the story that helps bring it to life.

It’s no secret Hobb is one of my favorite authors, and I hope I was able to convey a smidgen of why that is through my gushing. These books are excellent, but they definitely have a slower pacing compared to some other fantasy novels on the market (although never boring). If that doesn’t bother you then trust me, you’re in for something amazing!

2 comments on “Book Review: City of Dragons by Robin Hobb”