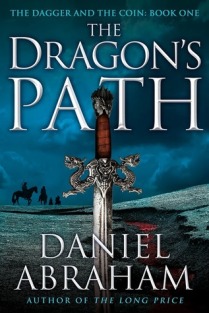 Series: The Dagger and the Coin #1

The Overview: All paths lead to war…
Marcus’ hero days are behind him. He knows too well that even the smallest war still means somebody’s death. When his men are impressed into a doomed army, staying out of a battle he wants no part of requires some unorthodox steps. Cithrin is an orphan, ward of a banking house. Her job is to smuggle a nation’s wealth across a war zone, hiding the gold from both sides. She knows the secret life of commerce like a second language, but the strategies of trade will not defend her from swords. Geder, sole scion of a noble house, has more interest in philosophy than in swordplay. A poor excuse for a soldier, he is a pawn in these games. No one can predict what he will become. Falling pebbles can start a landslide. A spat between the Free Cities and the Severed Throne is spiraling out of control. A new player rises from the depths of history, fanning the flames that will sweep the entire region onto The Dragon’s Path-the path to war.

While The Dragon’s Path was entertaining, I’m sad to say I didn’t like it nearly as much as the other two series I’ve read from this author (The Long Price Quartet & Leviathan).

Abraham has a talent for orchestrating multiple POVs. While it was especially brilliant in Leviathan and LPQ, it didn’t work as well for me here. I’ve been known to criticize authors who have more than two POVs because they run the risk that readers will have a hard time getting emotionally invested with so many characters (I know people who skip entire passages when this happens just to get back to the characters they like). Up to this point, I’ve used Abraham as a prime example on how to present multiple protagonists without losing any interest or momentum from the story. I don’t think what I read in The Dragon’s Path was necessarily poor execution, I just found myself much more interested in some characters over others. I often found myself hurrying through passages so I could get back to the perspectives of my favorites – which I’m sure didn’t help matters.

I will say though that by the end of the book all of the characters eventually caught my interest, but I wish that would’ve happened much earlier on. There’s a chance the reason I felt disconnected was because he introduced each character one after the other, so it was a good 80 pages before there was a repeat POV. In his other novels, he had just as many protagonists, but he started with one or two, letting us get established with them, and then moved on to introduce more as the story progressed.

Anyway, the book had sparks of the same originality as The Long Price Quartet, and the inclusion of original nonhuman races was probably my favorite element. Well, maybe “nonhuman” isn’t the right term – they were humanlike, but of a different variety or species. I thought they added an interesting dynamic to the story. I liked the ideas so much I wish there had been an even stronger focus on their differences – everything from mannerisms to physical attributes – because I found myself sometimes forgetting that some of the characters weren’t “human.” That said, there were definitely a few great drop-in references (I noticed more at the end than at the beginning), I just would have liked there to have been a little more.

So I’ve kind of established that I enjoyed the second-half of the book a lot more than the first, and part of that has to do with how well it ended. The ending offered a cool “reveal” – one which has me especially interested in continuing on in the series. This author has dazzled me so much in the past that I definitely have hope that the second book (The King’s Blood) will grab me where the first did not.

As you can see, most of my objections to the story are preferential, and I’d like to clarify that there really wasn’t flaw to the way the story was written – I just would’ve liked to see slightly different approach. Because of that, it would still definitely recommend this title to other fantasy lovers, but only after handing them A Shadow in Summer (LPQ #1) first. And for science fiction fans, you can’t get any more kickass than the Leviathan series.

The Lascar’s Dagger by Glenda Larke

Heart of Myrial by Maggie Furey

6 comments on “Book Review: The Dragon’s Path by Daniel Abraham”