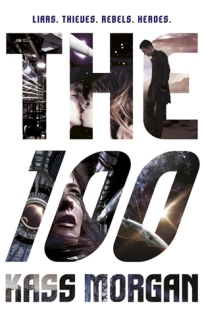 The Overview: In the future, humans live in city-like spaceships orbiting far above Earth’s toxic atmosphere. No one knows when, or even if, the long-abandoned planet will be habitable again. But faced with dwindling resources and a growing populace, government leaders know they must reclaim their homeland… before it’s too late.

Now, one hundred juvenile delinquents are being sent on a high-stakes mission to recolonize Earth. After a brutal crash landing, the teens arrive on a savagely beautiful planet they’ve only seen from space. Confronting the dangers of this rugged new world, they struggle to form a tentative community. But they’re haunted by their past and uncertain about the future. To survive, they must learn to trust – and even love – again.

I’ve been wanting to read The Hundred since long before I discovered they were making it into a TV show. But because I never quite got around to it, I actually ended up watching the show (at least the first 7 or 8 episodes) first. I normally don’t pick up the book after I’ve seen the cinematic version of things (preferring to read them beforehand), but I made an exception in this case (the reasons for which I will dive into a little later in the review). Anyway, because I’ve had the chance to experience both book and TV, it allows me to turn this review into a full-out comparison of both formats.

I have to say, the book was written a lot better than I thought it would be. It’s easy to see why the producers originally decided it would make a good TV show – Morgan provided an excellent base of ideas, plot points, and characters to work with. What’s great about the writers of the show is that they took all of those superb elements and, in my opinion, elevated them.

For example, the major conflict of the story (the fact that this ship is dying), was the overall story arc in both formats. However, while Morgan introduced it much later in the story (almost at the end), the show writers conveyed it to the audience within the first episode – immediately raising the stakes and increasing the intensity of the story. This was actually my favorite difference between the book and the show – by introducing the overall arc of the story right from the get-go, they were able to use it as a major plot-driver through all of the episodes, making the audience more engaged right from the beginning. It was exciting because this is the way I prefer to receive conflicts for stories in general – I love having as much information up front as possible. So being able to see the contrasts of the two different strategies side-by-side was fascinating (especially since it helped reaffirm my own opinion… I love it when that happens).

Of course, as with any format change, some things are added and some things are lost in translation. There were situations that matched up perfectly, and others that were changed entirely. Neither were bad or good, it’s just a different way of telling the story. The show even left out one of the four POVs in the book (at least so far), and that brings me to my next category:

I admit it was a lot easier to get a feel for the characters in the book since I saw them as, you know, actual people first. I think the show did a great job casting, but again here’s where the writers show their strengths by giving us behaviors and dialogs that were really true to how Morgan presented them. I had no trouble going from one format to the other in this case. What’s interesting is, you would think the book would allow you to dig a little deeper into character and get to know them more, but the show did such a great job showcasing their personalities (even if it was sometimes a little over the top) and utilizing several flashbacks to help us get to know them (also in the book) that I didn’t really learn anything more about them from the novel.

The TV show also included quite a few more prominent characters than the book. I think they kind of needed to, as the book was pretty self-contained to the main POVs. In a book, if the main characters are focused on something, no one really cares what anybody else is doing if it doesn’t affect them directly (other than for general atmosphere). But when you are filming the same scene, everybody in the background has to actually be doing something. The show would have been pretty boring if none of the other characters got involved in the plot, to one degree or another.

When you have so many extra characters, the plot can often be influenced by their actions and decisions. The show writers didn’t pull any punches when imagining how 100 juvenile delinquents would behave unsupervised in an unexplored world. It had tons of bullying, violence, sexuality, partying and debauchery in general that was present but not nearly as prominent in the book. This really surprised me because, when I initially picked up the book, I was expecting something along the lines of Lord of the Flies, but in really it rarely highlighted any character other than the immediate POVs.

I mentioned above that I had my reasons for reading the book even though I’d already started watching the show. You see, the show was so much more intense, violent, and dark than I thought it would be, so I decided to kind of prepare myself for those moments… It’s always easier for me to read about all of those grimace-worthy moments than it is to watch them. The problem is, all of the events I’d already seen that had me feeling a little squeamish weren’t in the book at all (there goes that plan…). So even though I don’t regret reading the book, it never actually served the purpose I hoped it would. In fact, I feel a little less prepared than I had before. Considering I haven’t yet finished the first season of the show, it makes me wonder if all of those extras were added for shock value or if the chronology of the seasons don’t quite line up with the books. Maybe those scenes do show up in the second and third installments, but I’m not sure yet.

In addition to the delinquents on the ground, the show added quite a few characters to the scenes that take place on the ship and I really like how those extra characters and scenes added to the story. It reminded me strongly of Hunger Games – how the video would cut back and forth between the arena and what was going on in the Capitol. These scenes weren’t actually in Collins’ book, but they were definitely implied, so seeing it in the movie really helped give the viewer a complete picture of everybody involved in the conflict. The same principle happens in The Hundred. For example, the perspective that took place on the ship in the book was from Glass’s POV (a teenage girl who escaped from the pod heading to earth at the last minute and, incidentally, was one of the characters not present in the show (so far as I’ve seen!?)). While Glass allowed us to see what was happening on the ship, all of her information was secondhand and incidental. In the show’s version, the ship’s POVs were all people high up in the hierarchy and therefore infinitely more involved in the action and drama. Again, this is an instance where I liked the book, but I thought the writers of the show made some really smart moves.

As you would imagine, the TV show provided so many rich and vibrant visuals that the book didn’t even stand a chance (there was nothing wrong with the descriptions, it just couldn’t compete with the evoking sounds and imagery of the show). It’s kind of along the same lines of why I can read books with blood, guts, and gore, but have a difficult time watching shows like CSI – seeing it creates a reaction somewhat stronger than merely reading it. I like that while I was reading the book I had such strong memories of the show to draw from. The base Morgan gave was fantastic, so seeing it all brought to life was and experience to say the least. This is definitely one of the most visually evoking shows I’ve seen in a while which was a pleasant surprise.

Even though I didn’t get the answers I was seeking in the book, I’m glad I broke my normal rule and decided to read it anyway. I thoroughly enjoyed the bits that weren’t in the show (specifically Glass’ perspective) and loved seeing how great writing was translated into great filmmaking. Reading the book first won’t take away any of the surprises in the show (weird, huh?) and watching the show first will provide you with great visuals (and actors) to picture when diving into the book. I was impressed, and will be continuing on with both the book and the show (if I can handle the intensity, haha).

These Broken Stars by Amie Kaufman and Meagan Spooner