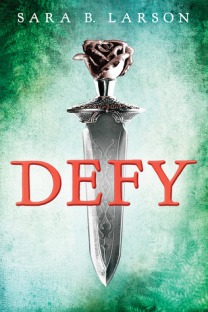 The Overview: Alexa Hollen is a fighter. Forced to disguise herself as a boy and serve in the king’s army, Alex uses her quick wit and fierce sword-fighting skills to earn a spot on the elite prince’s guard. But when a powerful sorcerer sneaks into the palace in the dead of night, even Alex, who is virtually unbeatable, can’t prevent him from abducting her, her fellow guard and friend Rylan, and Prince Damian, taking them through the treacherous wilds of the jungle and deep into enemy territory.

The longer Alex is held captive with both Rylan and the prince, the more she realizes that she is not the only one who has been keeping dangerous secrets. And suddenly, after her own secret is revealed, Alex finds herself confronted with two men vying for her heart: the safe and steady Rylan, who has always cared for her, and the dark, intriguing Damian. With hidden foes lurking around every corner, is Alex strong enough to save herself and the kingdom she’s sworn to protect?

I picked up Defy kind of on a whim because I came across it at the library while planning for my upcoming trip to the Vegas Valley Book Festival in October. You see, Larson is scheduled to be at that event, and I’m trying to read all of the books that sound interesting before going. While Defy was definitely on my “books I’m interested in” list, it wasn’t near the top… but now I’m thinking maybe it should’ve been.

Every once in a while I’m lucky enough to pick up a book that fits my mood perfectly at that moment. I enjoyed Defy thoroughly while I was reading it (which is arguably the most important part), but when I examined its elements critically afterwards, several objections arose. Normally reflection just reinforces the opinions I formed while reading, but in this case, it kind of knocked Defy off its pedestal.

Defy takes a common story – a girl forced to take on the guise of a boy to survive – and presents it in slightly different way. Larson did what many other authors trying to execute this plot point did not – she made it feasible. First of all, Alexa was not a meek little waif but a tall, young woman graced with handsome enough features to pull off the ruse. She also had a twin brother, which went a long way towards completing the illusion. Add to all of that her powerful swordsmanship and fighting skills, and you have a combination for a very interesting take on a tired story. I really liked Alexa, even in though I feel she let herself slip out of “character” a few too many times. Maybe if she’d lost her deception pretense for any other reason than “boy troubles,” it wouldn’t have bothered me, but because she let herself be swayed by the opposite sex so often, I lost a little bit of that strong, independent’s character I fell in love with at the beginning. I’m hoping she gets some of that self-worth back in the second book because I know she’s got it in her.

I liked Larson’s world and her conflicts but, as with Cass’ Selection trilogy, I don’t think they’d hold up very well to close scrutiny. In fact, this is the number one objection I’ve read from my fellow reviewers. While I see their point of view (and don’t disagree with their assessments), I have to say none of the objections got in my way of enjoying the story while I was reading. I had such a fun time with this book, and I think that goes to show that a book doesn’t have to be perfect to be good. Larson’s focus may not have been on world-building, but her focus on characters, specifically relationships, was strong enough to keep me entertained.

Although, even the relationship deserves a disclaimer. I absolutely adored the relationship Alexa had with one person, but kind of hated the immature infatuation she had with another (those of you who are squeamish around love triangles should look away now). I love books where I can see the appeal of both male leads as potential mates but didn’t get that here. For me, there was only one clear winner for Alexa, and if I’m honest I will be reading on to see if that’s how the story fleshes out (although, I have a sneaking suspicion we are going to have a Jacob/Edward situation on our hands). We’ll see I guess.

So here’s my question: do I rate the book based on how it made me feel while I was reading it (close to 5 stars) or do I rate it based on my assessment of the book after I was finished (closer to 3 stars). I think the only thing to do is stop over-thinking it and just take an average of the two – a 4 star rating – and call it good. Overall, I really like Defy and felt its strengths outweighed its weaknesses. It had a similar qualities to the amazing books below, but I don’t have complete confidence behind my recommendation of it to others. I’d say if you go in expecting a light, fun read, you’ll probably enjoy it. I will definitely be seeking out Larson at the VVBF and have already purchased a hardcover copy to get signed.

The Midnight Thief by Livia Blackburne

2 comments on “Book Review: Defy by Sara B. Larson”