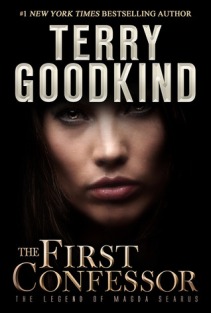 Overview: In the time before the Confessors, when the world is a dark and dangerous place, where treason and treachery are the rule of the day, comes one heroic woman, Magda Searus, who has just lost her husband and her way in life.

I don’t know about you, but when I pick up a prequel it’s because I’m interested to learn more about something referenced within the main series. As Kahlan is my single most favorite female character from any series, you can understand why the idea of learning more about where the Mother Confessors originated was incredibly appealing to me. The problem is, about 75% of this novel was focused on explaining all of the things readers would already know from having read the main series. Call me crazy, but I think we can safely assume that anybody interested in reading this book has probably read most, if not all of the Sword of Truth books. It’s bad enough Goodkind drills concepts into his readers over and over again throughout the entire saga, but to do it again in a 480 page prequel without showing us anything new was just plain disappointing.

Seriously, it was chapter after chapter of the same old things being explained to Magda (and her in turn explaining them to other people) – how the Temple of the Wind functions, what the Slith is and how she helps the wizards, who the Dream Walkers are (he spent a ton of time on this one), how the devotions to Rahl prevent said Dream Walkers from taking over, and how spectacularly special Magda Searus is. If any of this rings a bell, congratulations – you’ve just been gifted 3/4 of this book in one nifty little paragraph.

Ugh, I know I sound a little harsh, but I had several cool ideas on where I thought the story was going to go and was really disappointed when Goodkind didn’t explore any of them. I mean, come on! The Mother Confessor is an all-powerful (and kickass) character who has to live with the consequences every time she chooses to destroy a life for the “greater good,” and I was eager to learn what that would’ve been like for someone who wasn’t born and raised into this magic but had it thrust onto them as an experiment. Not to mention the effects this new powerful magic would have on society as a whole. But none of that was explored for more than a couple of paragraphs… it was kind of pathetic.

The thing is, I don’t think my opinion of this title will surprise many lovers of the main series – Goodkind has a reputation for being long-winded and incredibly repetitive. I normally am willing to sift through all of that for the golden moments that make his novels so special, but this is the first time I didn’t get a payoff for my efforts. Well, that’s not strictly true (Pillars of the Earth, I’m talking to you) but I think you know what I mean.

Overall, if you are a fan of the series, I don’t think The First Confessor is worth your time. Those who haven’t read any of Goodkind’s work might find it an entertaining fantasy, but why learn the stuff ahead of time if you just get to spend 10+ books rehashing it over and over again, anyway? For the record, I absolutely loved the series the first time around and highly recommend it… just skip past this particular one and call it a day. :-)

The Last Stormlord by Glenda Larke

The Last Dragonlord by JoAnne Bertin

The Wayfarer Redemption by Sara Douglass

2 comments on “Book Review: The First Confessor by Terry Goodkind”