Even though I brought home some titles last month, I never got around to composing a Stacking the Shelves post, so lucky you, here’s two months in one! ;-)

Considering I have just these six books to show for two whole months of book buying, I think I’m doing pretty good at moderating my spending. Oh, wait… I forgot about: 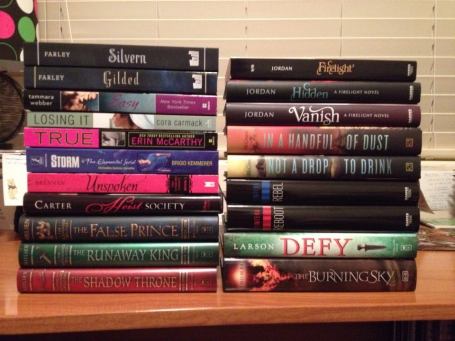 Hee hee. All signed! Although, I’d like to clarify that I only actually purchased four of these at the festival itself and of been slowly collecting the others over the past six months. Still, they feel like brand-new books! The two authors I was most excited to meet were Mindy McGinnis and Amy Tintera: 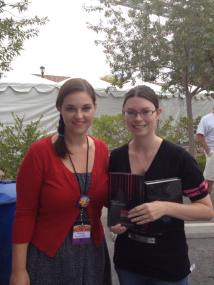 Yeah, I totally fangirled… It was awesome! I enjoyed meeting all of the authors and listening to them talk about their books on panel. Even though I read most of the books on my list before attending, I didn’t get a chance to read them all. Next year I have the best intentions to read them all, and I’m also getting my mom involved, so between the two of us will have talking points for everyone we meet at VVBF 2015! 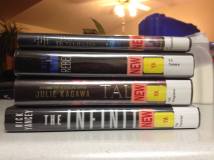 I’ve hung onto Reboot longer than I intended, but I’m kind of saving it for a rainy day. I’m also super excited to pick up The Merchant Emperor by Elizabeth Haydon – it has been several years in the making.

Not too bad for a haul, eh? I have to admit that even though I’ve been more conservative this year than in any year prior, I’m still behind in my, Read 4, Buy 1 Challenge, and it’s not looking too good for me to catch up by the end of the year. The bulk purchases made at that awesome used Seattle bookstore and the ones at the Vegas Valley book Festival are what did me in. Oh yeah, and four of the six books I’ve purchased in the last two months outside of those events were bought yesterday with my nifty Barnes & Noble 30% off coupons… I’m screwed LOL. Before that, I was only four books behind (if we don’t include the bulk purchases… which I’m not). In any case, I’m still showing progress and I wager next year will be even better!

What books did you bring home this month?

3 comments on “Stacking the Shelves: October/November 2014!”