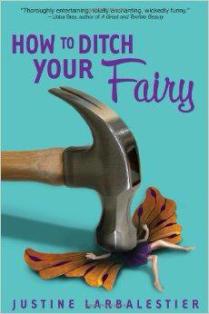 Title: How to Ditch Your Fairy

The Overview: Welcome to New Avalon, where everyone has a personal fairy. Though invisible to the naked eye, a personal fairy — like a specialized good luck charm — is vital to a person’s success. It might determine whether you make a sports team, pass a class, or find that perfect outfit. But for fourteen-year-old Charlie, having a parking fairy is worse than having nothing at all — especially when the school bully carts her around like his private parking pass.

Enter: The Plan. At first, teaming up with her archenemy Fiorenze (who has an all-the-boys-like-you fairy), seems like a great idea. But when Charlie unexpectedly gets her heart’s desire, it isn’t at all how she thought it would be, and she’ll have resort to extraordinary measures to set things right.

I admit I probably wouldn’t have picked up this book of my own accord, but my best friend (who has impeccable taste in books) claimed it early on as one of her favorites, talking about it for years. When it got chosen for our book club, I finally had the excuse I needed to drop everything else and pick it up. And you know what? I liked it.

I will also admit that I was a bit wary at first – I haven’t had the best patience with books geared towards younger audiences lately, so I was worried it would be too immature for my tastes. While it definitely had a younger feel (largely because of the subject-matter) the author wrote it in a way I found accessible (and entertaining) as an adult. It made me nostalgic of all of the books I read when I was a tween, and that aspect was easily my favorite component of the book.

I also loved the concept – come on! A fictitious world in which people towed around invisible fairies who offered them various forms of luck? Not to mention the rules surrounding this phenomenon were as complex as they were weird. It was a recipe for fun, and led to a couple of laugh out loud moments for me as the main character fought to get rid of a fairy she most desperately despised. This concept made for both entertaining reading and some excellent discussion at our book club meeting – we all tried to figure out what type of fairy each of us had and, even more fun, speculate on the types of fairies we’d like to have (for example, it was unanimously determined that I am in the possession of an “organization” fairy, as I always manage to make things fit (gorgeously) into a given space… with a possible “color-coding” fairy as my secondary. If I could, I’d opt for a “sleep” fairy that would allow me to wake up refreshed no matter how little I slept – just think of all the books I could read with all that extra time!).

Anyway, back to the actual book, aside from some weird made up words that led to some confusion (which could’ve been avoided had I realize there was a glossary at the back… why don’t they ever indicate that within the text?), How to Ditch Your Fairy was a thoroughly enjoyable read. I recommend it for younger teen girls or adults in the mood for something 100% lighthearted and fun.

The Boys Start the War… by Phyllis Reynolds Naylor