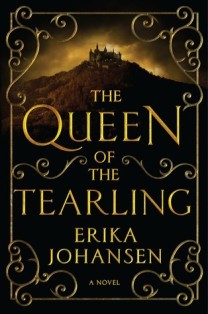 Title: Queen of the Tearling

Series: Queen of the Tearling #1

The Overview: An untested young princess must claim her throne, learn to become a queen, and combat a malevolent sorceress in an epic battle between light and darkness in this spectacular debut—the first novel in a trilogy.

Young Kelsea Raleigh was raised in hiding after the death of her mother, Queen Elyssa, far from the intrigues of the royal Keep and in the care of two devoted servants who pledged their lives to protect her. Growing up in a cottage deep in the woods, Kelsea knows little of her kingdom’s haunted past . . . or that its fate will soon rest in her hands.

This is a reviewing feature I’ve been eyeballing on one of my favorite book blogs There Were Books Involved for a couple years now because I think it’s an excellent way to talk about an unfinished book fairly. I’m incredibly grateful because Nikki (the brains behind the blog, who has a most excellent name)  kindly allowed me to steal the idea and questions for my own blog. As my list of “amazing books to read” continues to grow, I find I have less and less time and patience to devote to the books I’m just not enjoying. I never would have considered DNFing a book ten years ago, but then I came across a quote, “Read the best books first, for you might not have the chance to read them all,” and have since made it my personal mantra. So let the Q&A begin!

Did you really give Queen of the Tearling a chance?

Yes, but admittedly not nearly as much of a chance as I could have. I made it about 20% before putting it down (which, when you’re not enjoying the book, is actually pretty far in my opinion).

Absolutely! In fact, some of my all-time favorite books come from the Teen Fantasy genre:

Yes – since reading Girl of Fire and Thorns by Rae Carson (and in the process discovering my new favorite teen book), I’ve been clamoring for anything to come close to being just as good. After reading the overview, I’d hoped Queen of the Tearling would be that book. Sadly, it didn’t even come close.

It’s a long story that I feel compelled to elaborate, but at the crux of it, the author lost my trust in her ability to compose a solid story very early on. Everything about her storytelling was one big contradiction after another. Here are a few examples:

These are just a few examples, all of which contributed to my growing discontent with the story. My biggest issue was with the soldiers. They were really unbelievable. I’ve read dozens of fantasy novels with soldiers from all walks of life and in all sorts of odd situations (most recently within The Game of Thrones – an excellent example of the variety of militaristic units and soldier behaviors) which is why I did not find these soldiers even remotely realistic. They did some very un-soldier like things that seemed very illogical and counterintuitive – which wouldn’t have been a big deal if the author had acknowledged (and possibly expanded on) it within the text. Unfortunately, I got the impression the author didn’t know what she was talking about and couldn’t bullshit convincingly.

I realize I sound like a fantasy snob with this assessment, but when you read enough of a certain genre, you can’t help but build up certain standards on the elements within it, and with that comes a certain expectation of consistency. These soldiers weren’t abnormal or a creative new take on an old idea, they just weren’t well-developed, lacking common sense, knowledge, and training. It was clear by the way it was written that it was a lack on the author’s part rather than the characters’.

Okay, I think I’ve beaten that topic to death. Moving on…

Was there anything you liked about the book?

I’d like to say I really liked its concepts and characters, but even 100 pages in, I didn’t notice anything unique about the story. I did find the main character kind of interesting before she started contradicting herself.

Sadly, no. The author has fully and truly lost my trust in her ability to take me on an enjoyable journey.

Normally, if I don’t like a book, it’s based on personal preferences regarding the storyline. In this case, my colossal issue is with poor execution of craft, which I don’t think I could stand behind in recommending it to anyone.

One comment on “DNF: Queen of the Tearling by Erika Johansen”