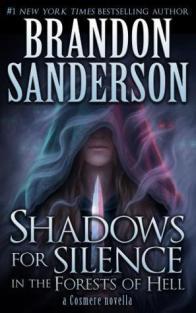 Title: Shadows for Silence in the Forests of Hell

The Overview: When the familiar and seemingly safe turns lethal, therein danger lies. Amid a forest where the shades of the dead linger all around, every homesteader knows to follow the Simple Rules: “Don’t kindle flame, don’t shed the blood of another, don’t run at night. These things draw shades.” Silence Montane has broken all three rules on more than one occasion. And to protect her family from a murderous gang with high bounties on their heads, Silence will break every rule again, at the risk of becoming a shade herself. -Goodreads

If you only read one novella from Brandon Sanderson, Shadows for Silence in the Forests of Hell would be my top pick (by a smidgen – they’re all awesome. And really, why would you limit yourself to just one?). It’s just one more example why Sanderson is one of my favorite authors – his novellas are every bit as good as his full-length novels. I loved this one because it had the perfect mix of characterization, setting, story, pacing, action, and resolution. It felt like a snippet out of a fully developed novel, but was self-contained enough to stand complete on its own. Silence, the main character, really struck a chord with me – her decision-making during the most intense scenes of the story still have me reeling months later. I want to get into the nitty-gritty details and geek out about all of them, but I can’t discuss it to my satisfaction without spoilers. So just take my word for it – this is definitely worth reading! :-)

The Way of Shadows by Brent Weeks

12 comments on “Novella Review: Shadows for Silence in the Forests of Hell by Brandon Sanderson”