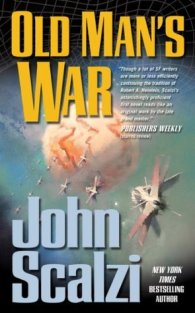 The Overview: John Perry did two things on his 75th birthday. First he visited his wife’s grave. Then he joined the army.The good news is that humanity finally made it into interstellar space. The bad news is that planets fit to live on are scarce– and alien races willing to fight us for them are common. So: we fight. To defend Earth, and to stake our own claim to planetary real estate. Far from Earth, the war has been going on for decades: brutal, bloody, unyielding... -Goodreads

I’m so glad I finally started The Old Man’s War series – it’s every bit as good as I’d hoped it would be. Filled with humor, action, exploration, and a touch of sentimentality, if you’re looking for your next great sci-fi read, this may be it! The book is essentially about John Perry, a 75-year-old man who signs up for the Army to fight an intergalactic war. John’s POV was my favorite element of the book. His “wisened” outlook on life and general mannerisms were a delightful contrast to the hard-assed whippersnappers who usually star in good sci-fi. The POV definitely elevated an already good story to a fantastic one, but lord save me from old-man jokes (okay, fine. I laughed at all of them).

I also really love to the type of science fiction the book was: a perfect blend of technological advancement, alien interactions, and militaristic elements. The best part is, I think Scalzi has only just scratched the surface of it’s potential in this first book. The first half of the novel moved at a significantly slower pace than the second half, which was great because it felt more organic, giving the latter parts of the book higher impact by contrast. So rest assured, if you pick it up and wonder if it actually goes somewhere, the answer is an emphatic yes – and hang onto your seats when you get there. Incidentally, the slower sections were my favorites.

I mentioned a bit of sentimentality at the beginning of the review. There is a, shall we say “softer” element near the end of the book that I didn’t necessarily care for. It’s the only thing that pinged against my rating, even though it really wasn’t a big factor in the whole scheme of things. I liked the idea, but thought it was a bit too heavy-handed. I’m hoping it will smooth out a bit in the second book (which I will definitely be reading ASAP).

Overall, Old Man’s War was one of the most interesting science fiction I’ve read. I think it fits the bill as both a must-read for seasoned sci-fi lovers and a great introductory novel for new readers of the genre. If you loved Orson Scott Card’s Ender’s Game as a young adult (as I did), Old Man’s War is its perfect evolution.