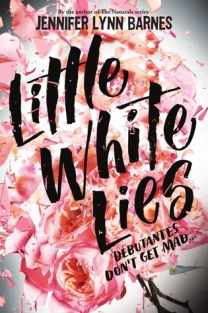 The Overview: Eighteen-year-old auto mechanic Sawyer Taft did not expect her estranged grandmother to show up at her apartment door and offer her a six-figure contract to participate in debutante season. And she definitely never imagined she would accept. But when she realizes that immersing herself in her grandmother’s “society” might mean discovering the answer to the biggest mystery of her life-her father’s identity-she signs on the dotted line and braces herself for a year of makeovers, big dresses, bigger egos, and a whole lot of bless your heart. The one thing she doesn’t expect to find is friendship, but as she’s drawn into a group of debutantes with scandalous, dangerous secrets of their own, Sawyer quickly discovers that her family isn’t the only mainstay of high society with skeletons in their closet. There are people in her grandmother’s glittering world who are not what they appear, and no one wants Sawyer poking her nose into the past. As she navigates the twisted relationships between her new friends and their powerful parents, Sawyer’s search for the truth about her own origins is just the beginning. Set in the world of debutante balls, grand estates and rolling green hills, Little White Lies combines a charming setting, a classic fish-out-of-water story, and the sort of layered mystery only author Jennifer Lynn Barnes can pull off. -Goodreads

Jennifer Lynn Barnes is one of my favorite writers for her intelligent, almost interactive writing style. She’s an author I trust to take me on a wild ride and keep me guessing the entire way. Little White Lies had all of those great components (even if it was a little more lighthearted than I’m used to reading from her) topped off with some good old southern charm… and snark.

I have to say, the story took a while to get going. I never read more than the first one or two sentences of an overview (mostly to avoid what I consider spoilers), relying on author familiarity and friends’ endorsements to choose titles. As a result, I leave it up to the book to provide an inciting moment to kick things off… however, it took reading almost 20% of Little White Lies before I felt I had a grasp on what the story was supposed to be working towards (which is passable, but still a tad to long for my tastes).

Aside from the slow beginning, most of the book provided that addictive, engaging plot full of twists and turns. The basic idea behind the story was perhaps not as compelling as that found in her Naturals series (it’s a bit easier to feel suspense when you’re dealing with a multiple homicide story as opposed to a reluctant debutant playing a game of “who’s your daddy”), but as always, she found a way to make it fun..

The characters in this book were wildly entertaining, but I never really felt a connection with any of them. Their profiles were animated enough that they almost came across as caricatures than actual people (which upped the fun but lowered the substance). The main character had a good inner story, but she never really let down her tough exterior front to let the reader in. The Naturals series had several instances of deep character explorations dealing with motive (frighteningly poignant at times), so I think my expectations were inflated by how wicked cool I’ve seen her present characters in the past. Overall, they were good, but I think me wanting a little more was the biggest factor against my rating.

Series status: the Debutantes series is currently slotted for two books, and I’ll definitely be picking up the second one when it comes out (fall 2019?).

Recommendations: Little White Lies is a fun (I’ve said that word a lot this review) YA story about debutants getting up to no good. The shenanigans will give you a few laughs and the mysteries will keep you turning pages. It’s not the most profound thing I’ve read from this author, but it’s still worth noting if you like these types of books. :)

Burn for Me by Ilona Andrews