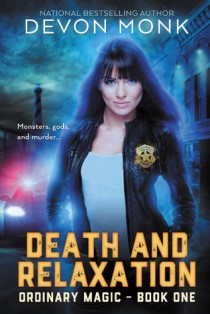 The Overview: Police Chief Delaney Reed can handle the Valkyries, werewolves, gill-men and other paranormal creatures who call the small beach town of Ordinary, Oregon their home. It’s the vacationing gods who keep her up at night. With the famous Rhubarb Festival right around the corner, small-town tensions, tempers, and godly tantrums are at an all-time high. The last thing Delaney needs is her ex-boyfriend reappearing just when she’s finally caught the attention of Ryder Bailey, the one man she should never love. No, scratch that. The actual last thing she needs is a dead body washing ashore, especially since the dead body is a god. Catching a murderer, wrestling a god power, and re-scheduling the apocalypse? Just another day on the job in Ordinary. Falling in love with her childhood friend while trying to keep the secrets of her town secret? That’s gonna take some work. –Goodreads

I’ve had a high opinion of Devon Monk’s writing for a while now, so when Death and Relaxation was offered as a review copy (audio production quality) I snatched it up. I’ve been on a pretty hard urban fantasy kick lately, but I’ll admit this series wasn’t even on my radar (probably because of the atrocious cover). But I tell you what – it hit the spot!

It had a great combination of concept (small town Oregon where gods go to vacation), character (a young female police chief who takes over the department after her father dies), mystery (who the heck is ballsy enough to commit a murder in a town of gods?), and love story (the cute dynamic between the MC and the love interest – it’s just enough to be a clear selling point of the novel, but not overdone to the point where it becomes the sole focus). It was one of those books perfectly suited to my mood, and because it came from a seasoned author I trust, I was able to turn off my over-critical eye and just enjoy the ride.

Admittedly the concept wouldn’t stand up to close scrutiny, but it’s clear from the start that its main purpose is to enhance the quirky nature of this small touristy town. I started with the novella (Dues and Don’ts – Free on the author’s webiste), which I would recommend because it sets the stage on what to expect in this town a lot better than the first book. It incorporated the tradition of local artisans hiding glass figurines along the beach for tourists to find, which apparently is something that actually happens in the town the series is based on. I was enamored with the whole thing. I think the fun dynamics between all the characters in this little community is my biggest source of delight. Quirky fun things like rhubarb cooking contests an long-standing interpersonal squabbles (which, naturally, involve the whole town). Any Gilmore Girls fan out there will get a better idea if I say it’s a supernatural version of Stars Hollow (only without the aggravating characters that take the fun out of the scenes – Mayor Taylor Doose, I’m talking to you).

The only ding against its rating is that I thought the solution to one of the main conflicts of the story was completely obvious right from the start. I can half-rationalize it away if I try hard enough. Like, maybe the main character had too many things going on to see it clearly. But really it would’ve made the book stronger to either hide it better or to have the characters figure it out sooner. So far that has been my only gripe.

This is one of my new personal favorite series starters – I enjoyed it that much. It is definitely more on the lighthearted side of the genre. There’s not a lot of dark grittiness that sets the tone for comparable series. But maybe that’s what I’d needed – a bit of a pick-me-up. :)

Recommendations: start with the novella! I’d hand this series to people who like urban fantasy without the semi-horror aspect. It’s actually a great crossover novel between uf, mystery, and romance. If you can snag the GraphicAudio version, you’re in for a treat! Go in with a light heart and have some fun. :)