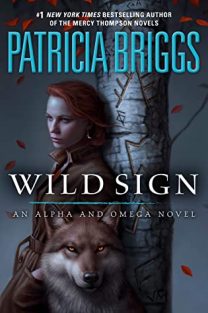 The Overview: In the wilds of the Northern California mountains, all the inhabitants of a small town have gone missing. It’s as if the people picked up and left everything they owned behind. Fearing something supernatural might be going on, the FBI taps a source they’ve consulted in the past: the werewolves Charles Cornick and Anna Latham. But Charles and Anna soon find a deserted town is the least of the mysteries they face. Death sings in the forest, and when it calls, Charles and Anna must answer. Something has awakened in the heart of the California mountains, something old and dangerous — and it has met werewolves before. –Goodreads

Reading a Briggs book always feels like a warm hug.

This is one of my favorite urban fantasy series. And it’s one of the rare few that I don’t complain about the story being dragged out too long. Each novel (both Mercy and Alpha & Omega) adds just a little more depth to the series. The new supernatural beings introduced in each book are always fun to read about, but the real draw is any new information we learn about the Marrok and his pack. There are so many great characters to expand on, it’s easy to see how this series has been able to sustain itself for so long.

In Wild Sign we got to explore the past of Leah, a character who has been a complete enigma up to this point. Her backstory was fascinating and I love that I can go forward knowing a little more about what makes her tick. By extension, we also learned more about Bran in this novel which is a huge bonus. It’s actually kind of funny that I’m so exited about the revelations for these two characters considering they weren’t even the stars of the show.

I heard Patricia Briggs talk about how she comes up with stories at an author signing (which, by the way, was the single best author interaction I’ve ever had. If you have a chance to make one of her events, go! She’s so kind). She starts by giving the characters a problem, then stays in tune with them as she writes to see how they’re going to solve it. In this case the problem was something making the residents of Wild Sign disappear… I’ll leave it at that. I always love the mystery element in her stories. It makes for an engaging, page-turning experience as the characters reason things out and make discoveries. And something about the settings lately have been giving me a modern-day western vibe, which is fun.

This particular book had some cool revelation, but it didn’t advance the plot of the overall series to any significant degree. It did, however, provide some good foreshadowing of what’s to come, for which I’m excited.

Recommendations: this is one of my favorite urban fantasy series for a reason. They’re fun, engaging books with great characters, good mysteries, and decent action, adding more depth with each book. I’d strongly recommend reading Mercy Thompson and Alpha & Omega in tandem by publication date, as the overall arc of the series progresses in both series.

I’d like to thank Berkley Publishing Group, Patricia Briggs, and Netgalley for the review copy of Wild Sign!