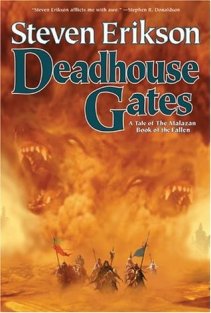 The Overview: In the vast dominion of Seven Cities, in the Holy Desert Raraku, the seer Sha’ik and her followers prepare for the long-prophesied uprising known as the Whirlwind. Unprecedented in size and savagery, this maelstrom of fanaticism and bloodlust will embroil the Malazan Empire in one of the bloodiest conflicts it has ever known, shaping destinies and giving birth to legends. -Goodreads

I started Deadhouse Gates in January… Of 2019.

The writing is dense, no bout a doubt it, but it took a lot longer than it probably should have to get through the book considering how good it is. Part of my problem is that I’m a perfectionist and a completionist, so if I was going to tackle a series like Malazan, I wanted to make sure I got the full experience from it. There are so many characters and places referenced that it really does take a lot of extra concentration to keep it all straight. And I don’t know about you, but as soon as I start to lose focus and get confused on which character I’m reading about, my level of engagement and investment in the story drops significantly. So I read this at a snail’s pace, utilizing kindle’s X-ray feature what seemed like every freaking page to make sure I knew who or where or what was being referenced. Not to mention that the writing itself is very abrupt and succinct, especially surrounding revelations and epiphanies, so I constantly had to reread passages to make sure I understood all of its implications. All in all, a very slow process. And one that is not conducive to dragging out the reading over several, uh, years. I kept putting it down in favor of things that took less effort and eventually, this past January 2021, decided to lay everything else aside and commit fully to Malazan. I restarted the book and overall, with my full attention devoted, it took about three months to read.

It was soooooo worth the effort!

There’s no doubt in my mind that this book and series (as far as I’ve gotten) are masterpieces brilliant in their originality, expansiveness, and execution. The reading experience is unlike anything I’ve come across before (clearly) and the total immersion required almost guarantees you’re going to take a few gut punches. I can see why so many proficient fantasy readers hold Malazan on a pedestal – it’s truly an amazing story.

Believe it or not, DG was actually a little easier to follow than Gardens of the Moon. There were fewer new characters to follow and it seemed like we circled back to them more frequently. I particularly loved the elegant plot construction. It was an intertwined, unfolding “dance” of information and convergence of characters that built to an amazing peak that left my brain wheeling. It was so thoughtful and so well-executed. I truly can’t wait to see what the author has in store for me next. Now that I think I’ve gotten the hang of reading this series, I’m hoping I’ll be able to clip along a bit faster.

So how do I rate something like this? If I’m applying based on merit alone, it’s a solid 5 stars. However I think it’s important to also consider my actual reading experience with the book, and the fact that it took so much time and effort should be represented (even though that’s just as much on me as it is the writing). 4.5 stars it is.

Recommendations: this is one of the most remarkable books I’ve ever read and I consider the series a must-try for fans of the fantasy genre. It’s not for everyone and will require a lot more concentration than most novels, but the payoff is well worth the effort. Maybe try not to be as anal-retentive as I was in keeping the details straight and just enjoy the process (after all, if an element is truly important the author will most assuredly highlight it again at some point). If you can get into the swing of it, get ready for one of the coolest reading experiences you’ll ever have!

When the Heavens Fall by Marc Turner

The Blade Itself by Joe Abercrombie

The Last Stormlord by Glenda Larke

Promise of Blood by Brian McClellan