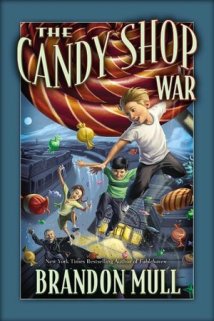 The Overview: What if there were a place where you could get magical candy? Moon rocks that made you feel weightless. Jawbreakers that made you unbreakable. Or candy that gave animals temporary human intelligence and communication skills. (Imagine what your pet would say!) Four young friends, Nate, Summer, Trevor, and Pigeon, are befriended by Belinda White, the owner of a new candy shop on Main Street. However, the gray- haired, grandmotherly Mrs. White is not an ordinary candy maker. Her confections have magical side effects. Purposefully, she invites the kids on a special mission to retrieve a hidden talisman under Mt. Diablo Elementary School. However, Mrs. White is not the only magician in town in search of the ancient artifact rumored to be a fountain of youth. She is aware that Mr. Stott, the not- so- ordinary ice cream truck driver, has a few tricks of his own.

I decided to read “The Candy Shop War” mostly because I am a huge fan of the Fablehaven series, and thought I would give this one a try. He did such a good job capturing my imagination in Fablehaven that I’ve reread it several times. If it weren’t for Harry Potter novels, which stand on a pedestal and always will, I would argue that they are my favorite YA books of all time.

This book is about four kids who get caught up in a war of magicians. Going on special missions for these magicians, the kids are given candies that bestow on them several magical abilities. The story is definitely meant for a younger demographic, and I think it does a good job hitting it’s target audience. While some YA books have the ability to transcend generation, I unfortunately don’t think this was one of them. The storyline was fun, and the characters felt like kids we all grew up with, but it was just a little over the top. I don’t usually go for totally fantastical stories, but there are plenty of people who do like them and would probably enjoy it. I also found it a bit anti-climatic.

While the plot is juvenile in nature, the writing is surprisingly sophisticated. Mull is a great example of an author who doesn’t “dumb it down” when writing for a younger audience. Because of this, along with the study-guide at the back, I think it’s an excellent tool for educators to teach their students vocabulary, critical thinking, and ethics. As for the rest of us, if you’re in the mood for something to make you feel like a kid again, this one will certainly do the trick!

Recommendations: Although this one was fun, I would definitely recommend you read the Fablehaven series first as an introduction to Mull’s works. If this one sounds like the perfect book for you, be on the lookout for the sequel “The Candy Shop War: Arcade Catastrophe” out October 23rd!