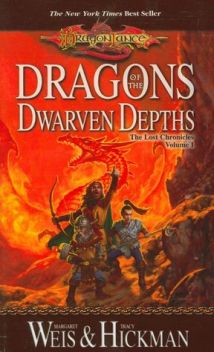 The Overview: Tanis and Flint seek out a haven in the dwarven kingdom of Thorbardin while Raistlin is strangely drawn to the haunted fortress known as Skullcap. Sturm seeks the legendary Hammer of Kharas, and Tika embarks on a perilous journey to rescue those she loves from certain death.

But it is the Dwarf, Flint Fireforge, who faces the most crucial test. The heroes race against time to save the lives of those dependent on them and Flint is forced to make a difficult choice, one on which the future of mankind may rest.

Even though the Lost Chronicles are the latest in publication, they actually fall in the middle of the Dragonlance saga chronologically. It is an expansion of some events that happened that didn’t quite make it into the original series. Happy to have anything new from these authors, I was thrilled when it was released, and found it to be an incredibly nostalgic read.

I don’t think the original manuscript was a full trilogy, and so the authors had to add quite a bit of additional scenes to create a more sustainable storyline. This might be the main reason why certain elements were a bit repetitive. The perspective jumps around between about a dozen characters, and unfortunately that means we get the thoughts on certain events and behaviors several times over as we go through each character’s mental assessments. There was also quite a bit of series recap, but that didn’t bother me much – it’s been ages since I read the original story.

The characters are what make this saga so enjoyable, and I must say my favorite in this book was Tasslehoff – he is so delightfully irritating and cheerful that I have to give kudos to the authors for creating such a memorable character (one of many).

Overall, it was a fun addition totally entertaining the whole way through. I highly recommend it for fans of the series.