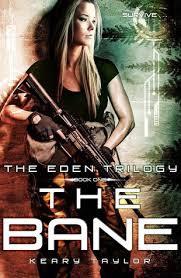 The Overview: Before the Evolution there was TorBane: technology that infused human DNA with cybernetic matter. It had the ability to grow new organs and limbs, to heal the world. Until it evolved out of control and spread like the common cold. The machine took over, the soul vanished, and the Bane were born. The Bane won’t stop until every last person has been infected. With less than two percent of the human population left, mankind is on the brink of extinction.

Eve knows the stories of the Evolution, the time before she wandered into the colony of Eden, unable to recall anything but her name. But she doesn’t need memories to know this world is her reality. This is a world that is quickly losing its humanity, one Bane at a time.

Fighting to keep one of the last remaining human colonies alive, Eve finds herself torn between her dedication to the colony, and the discovery of love. There is Avian and West – one a soldier, one a keeper of secrets. And in the end, Eve will make a choice that will change the future of mankind.

I got this book initially as an ARC, and I promised myself that I wouldn’t force myself to read it just because I got it before everyone else (as I’ve done a few times before). I liked the premise for the story, and by the first few chapters in, I was convinced this was something I would enjoy. If you’ve been following my blog for a while, you’re probably aware that I have a fondness for dystopian novels. Although the storyline of this particular one wasn’t incredibly original, there are some things about it that I really liked. For example, the very first scene of the book let me know right away what the stakes are in this world, who I’m supposed to be cheering for, and elements of mystery that made me want to keep reading. An excellent start that developed into a dang good book.

It didn’t take the path I was expecting it to, and I actually found that refreshing. It had a good full-circle storyline that left me satisfied, but also left room open for a sequel – which is extremely smart of her if she hadn’t been able to get a deal for more than one book. The writing was solid and evoking, and her character development was strong. The pacing could have been a bit quicker, with a few more setting changes early on, but it didn’t take away from the story too much. She also needed a bit more word variety. There were countless examples of her using a word to describe something then repeating the exact phrasing in the next line down. It happened so often I was beginning to wonder if it was deliberate. Also, the cover doesn’t sell the story to me. I feel like it would market better with a cover that looked more like the new Mila or even Wasserman’s Skinned (see recommends below) something to highlight the technological element of the story [Note: cover updated since original post… I like it better].

These are minor notes, and overall I consider the book well worth your time if you’re a fan of the genre. I am excited that it is a trilogy, and I will definitely be reading the next book!