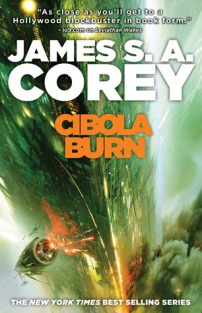 The Overview: The gates have opened the way to thousands of habitable planets, and the land rush has begun. Settlers stream out from humanity’s home planets in a vast, poorly controlled flood, landing on a new world. Among them, the Rocinante, haunted by the vast, posthuman network of the protomolecule as they investigate what destroyed the great intergalactic society that built the gates and the protomolecule. But Holden and his crew must also contend with the growing tensions between the settlers and the company which owns the official claim to the planet. Both sides will stop at nothing to defend what’s theirs, but soon a terrible disease strikes and only Holden – with help from the ghostly Detective Miller – can find the cure.

I included this title in yesterday’s TTT because Leviathan Wakes is still one of the best books I’ve read this year. So, even though I haven’t yet read the second or third in this series, I know by the time Cibola Burn is released I’ll be eager to get my hands on it. Daniel Abraham, one of the writers of this series has quickly become one of my favorite authors. His Long Price Quartet books blew me away, and I will definitely pick up anything he decides to write in the future. Incidentally, I read both the Leviathan and the Long Price books digitally, but loved them both enough to immediately go out and by the hardcopies for my collection. If you like fantasy or space opera science fiction and haven’t read these yet, you are sorely missing out!