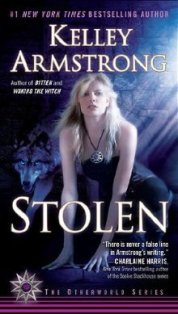 Series: Women of the Otherworld #2

The Overview: It was in Bitten, Kelley Armstrong’s debut novel, that thirty-year-old Elena Michaels came to terms with her feral appetites and claimed the proud identity of a beautiful, successful woman and the only living female werewolf. In Stolen, on a mission for her own elite pack, she is lured into the net of ruthless Internet billionaire Tyrone Winsloe, who has funded a bogus scientific investigation of the “other races” and their supernatural powers. Kidnapped and studied in his underground lab deep in the Maine woods, these paranormals – witches, vampires, shamans, werewolves – are then released and hunted to the death in a real-world video game. But when Winsloe captures Elena, he finally meets his match.

I absolutely devoured Bitten, the first book in the series (I’d been trying out different urban fantasies over the last several months and Bitten was easily one of my favorites). Then someone mentioned that it had been adapted for a show in Canada and, even better, that it was on Netflix. Flash forward two days (because I binge watched it) and I was completely hooked! I knew I loved the author’s writing, the characters, the story, and the show, so you’d better believe I scrambled to get ahold of the second book.

There was only one problem: the first book was meant as a standalone, so reading Stolen felt like reading another first book.

Normally, this would feel like a tragedy, as I love seeing the progression of a plot line over several books. In this case however, it kind of worked. Stolen was at least told from Elena’s perspective, and the writing was just as killer as ever. And the show “Bitten” did a fantastic job tweaking the story in a way that allowed them to end with a cliffhanger, which means the second season will at least give me that continuation I so desperately crave. Everybody wins… well, I do anyway.

That said, I thoroughly enjoyed every aspect of Stolen. Just as with the first book, I was completely absorbed, dragging it out whenever there was a spare moment to see what happened next. I read a lot, but I seldom feel addictively drawn back to a book, and Kelley Armstrong has managed to do that not once, but twice to me… needless to say, I will be continuing on. Although I admit I am a bit nervous about that. You see, she changes characters from here on out, and I’m so attached to Elena that I’m afraid I won’t enjoy it as much. At least I can be sure that whatever direction the story takes, the writing is going to be superb! And the craft – Armstrong has an incredible instinct for story, which makes me think I will love whatever tale she decides to weave together.

Overall, I wish I hadn’t waited so long to pick up this author. I can definitely see why she is considered a staple in the urban fantasy genre. I would highly recommend her to anyone who enjoyed authors like Patricia Briggs and Kim Harrison. I would doubly recommend the show to fans of True Blood – it was great for all the same reasons… in fact, I may have loved it even more.