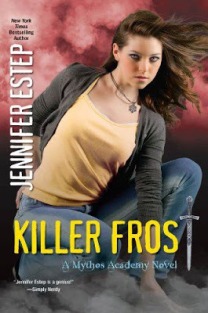 The Overview: I’ve battled the Reapers of Chaos before–and survived. But this time I have a Bad, Bad Feeling it’s going to be a fight to the death … most likely mine. Yeah, I’ve got my psychometry magic, my talking sword, Vic–and even the most dangerous Spartan on campus at my side, in Logan freaking Quinn, but I’m no match for Loki, the evil Norse god of chaos. I may be Nike’s Champion, but at heart, I’m still just Gwen Frost, that weird Gypsy girl everyone at school loves to gossip about. Then someone I love is put in more danger than ever before, and something inside me snaps. This time, Loki and his Reapers are going down for good … or I am.

Did you really give Killer Frost a chance?

Yes – especially when you consider it’s book 6, the final book in the series. The series took a nosedive around the fourth book, and I’ve been just trying to get it over with ever since (which is an awful sentiment – who wants to read anything “just to get it over with” like it’s a chore?). As harsh as that sounds, I did try, making it halfway through Killer Frost before putting it down.

You mean all of the YA Paranormal books that I can’t live without? Yes, I’ve enjoyed those. Here are some of my favorites:

Yes, Twilight is on there. Leave me alone.

Sadly, I think I expected exactly what I got – senseless rehashing of the same concepts over and over again; the random enemy attacks with no discernable strategy; and no real depth of character. Maybe that’s not totally true – maybe I expected more going into the finale of the series, so was even more disappointed when faced with the same issues I’d been noticing all along.

Frustration that I had already invested so much time in this series and it STILL wasn’t showing any improvement. As I mentioned, I read more than half of this book before finally putting it down, and at least 75% of that half was dialogue and speculation about what the problem was… very little action. Then the bad guys would sporadically show up, gloat, take something, then leave. Same stuff, different day. I ended up taking five minutes and skimming, reading only the first and last paragraphs of each chapter until I got to the end. And you know what? I feel like I got the entire essence of how the story ended without any of the fluff.

Another colossal disappointment was the great concept that never lived up to its potential. All of the students at Mythos Academy are descendents of Spartans, Ninjas, Valkyries, and many other kickass entities throughout history. They all attend this school to learn how to harness their powers and use them to fight the bad guys. The trouble is, aside from a handful of sparring sessions in the gym, none of those great ideas are explored anywhere THROUGHOUT THE ENTIRE SERIES! I wanted to attend school with the characters and learn with them, kind of like what I got to do in the Harry Potter and Percy Jackson books, but instead all we got to do was hang out at the library… A lot. Don’t get me wrong, library was a cool setting, but there were no classes there and everything seemed to revolve around it. I can’t seem to find the exact words to describe how disappointed I am in what I feel is the promise of a school for magic-users unfulfilled. They might as well have been at a prep school that offered a few fencing classes rather than a school for gifted kids. Such a great idea completely unrealized.

Was there anything you liked about Killer Frost?

This book specifically? No. The series in general? Yes – I really enjoyed the first two books and thought the concept behind the whole thing was really creative. It just failed on delivery. I honestly think it would’ve been a lot stronger condensed down to three books – I’m positive Estep could have included all of the main conflicts and cut out all of the endlessly repeating plot points and speculation. Maybe if she had made the school a bigger part of it… Bah – I’ll never get over that one.

Honestly, I’m not too sure anymore. I read the first book in her Spider series and enjoyed it, but now I’m almost afraid to keep going. What if I invest all of that time and wind up just as disappointed in the end? Maybe if I allow myself to stop reading as soon as I see it going south… what a sad sentiment.

No… I don’t think so. Perhaps the first three are recommendable, but why encourage someone to read a series that doesn’t really go anywhere?

I’m also curious if I’m the only one who felt this way about the series… Did anybody else happen to finish it? What are your thoughts?