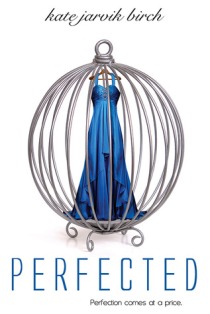 The Overview: Perfection comes at a price. As soon as the government passed legislation allowing humans to be genetically engineered and sold as pets, the rich and powerful rushed to own beautiful girls like Ella. Trained from birth to be graceful, demure, and above all, perfect, these “family companions” enter their masters’ homes prepared to live a life of idle luxury.

Ella is happy with her new role as playmate for a congressman’s bubbly young daughter, but she doesn’t expect Penn, the congressman’s handsome and rebellious son. He’s the only person who sees beyond the perfect exterior to the girl within. Falling for him goes against every rule she knows… and the freedom she finds with him is intoxicating. But when Ella is kidnapped and thrust into the dark underworld lurking beneath her pampered life, she’s faced with an unthinkable choice. Because the only thing more dangerous than staying with Penn’s family is leaving… and if she’s unsuccessful, she’ll face a fate far worse than death.

Perfected was my FAVORITE read of 2014. That’s right, 20-frigging-14! And I loved it so much that I hadn’t felt ready to compose a review for it up until this point (which is really stupid considering how often I find myself talking about it, even over a year later). Have you ever enjoyed something so much that no matter how much you gush about it in a review, it never seems to do it justice? That’s how I feel about Perfected – it was such an experience!

I’m a self-proclaimed addict of the sub genre “girls wearing pretty dresses in a slightly dystopic era” and Perfected is right up there alongside Lauren DeStefano’s Chemical Garden Trilogy. Birch created an intriguing fraction of society that puts on a glamorous, prestigious face to hide some pretty messed up practices. I mean, breeding and selling tiny, genetically engineered girls as pets?? That’s pretty disturbing, and it comes along with a whole host of nasty issues that Birch does an excellent job of acknowledging without dwelling on it (until the second book, which expands on many of these dark issues in a way that breaks your heart while at the same time giving the main character insights and epiphanies she needed to grow in strength and determination… more to come on that in my upcoming review of Tarnished).

Despite all this grit surrounding a fascinating main character, Birch found a way to tell a beautifully innocent love story, and do so with writing that was beautiful and poetic without ever becoming flowery or overdone. It struck a chord with me, which is why I can still vividly remember every bit of Perfected over a year later, and I’m already feeling the itch for a reread.

Overall, Perfected has landed itself as one of my all-time favorites, and I find myself talking about it often and passionately. It was just so well done and unique! If you enjoyed any of my recommends below, I suspect (and hope) you’ll love Perfected just as much!