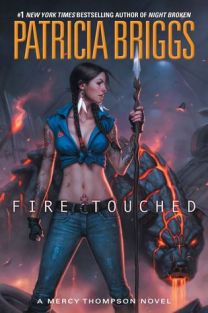 The Overview: Tensions between the fae and humans are coming to a head. And when coyote shapeshifter Mercy and her Alpha werewolf mate, Adam, are called upon to stop a rampaging troll, they find themselves with something that could be used to make the fae back down and forestall out-and-out war: a human child stolen long ago by the Fae. Defying the most powerful werewolf in the country, the humans, and the fae, Mercy, Adam, and their pack choose to protect the boy no matter what the cost. But who will protect them from a boy who is fire touched? [Via Goodreads]

I love Patricia Briggs and consider her among my all-time favorite urban fantasy writers alongside Jim Butcher, Kim Harrison, and Keri Arthur. She’s one of those authors who has been consistently good for so long that her books are on my very short “auto-buy” list. I never worry if I’ll like them or not (I always do) because they are the kind of guaranteed good reads that I’d save for rainy days if I wasn’t so eager to gobble them up the minute they hit the stands. Fire Touched, book 9 in the Mercy Thompson series, was no exception!

All of Briggs’ books have an excellent balance of internal and external conflicts. In every book, the crew has one big problem to solve (usually a supernatural monster of some sort) which leads to a lot of exciting, action-packed scenes. In Fire Touched, the problem, or “monster,” is the Gray Court of the Fae. Now, by this point in the series, Briggs has developed the Fae into a dynamic and complex society that I personally find absolutely fascinating to read about. This novel offers more of a glimpse into their inner workings and politics then we’ve seen before and, as usual, Mercy and Adam are right in the middle of the conflict.

I have to say, as good as the author is at creating engaging broad conflicts for her characters, it’s the smaller, interpersonal conflicts that make these books so much fun to read. Once again I found myself just as immersed in the werewolf pack’s dynamics as I was during the exciting battle scenes (if not more). The characters are all realistic and vibrant, and watching them argue and work out issues with one another is one of my little joys in life. In this book in particular, it felt like the focus was more on these interpersonal dynamics rather than the broader conflict (which I loved), but there were a couple of occasions where the plot seemed a little disjointed. That said, it all came together beautifully in the end and now I’m eager as ever to see what happens next.

As a bookseller who loved recommending titles, the “Mercy Thompson” series was easily my favorite urban fantasy to hand-sell. The story is less intimidating than say, the “Dresden Files” (which I also love) and makes a better first impression than “The Hollows” series (another favorite), and is a lot of fun to read. Now let’s face it, you’re probably not going to be very interested in my review of book 9 unless you’ve already read up to this point. If you haven’t, I’d highly recommend picking up a copy of “Moon Called,” the first in the series. Additionally, I’d recommend the Alpha and Omega series and suggest reading them alongside the Mercy books based on publication date, as the two series start to overlap as they get further along. That’s 13 books (so far) of great storytelling to look forward to! It makes me want to go back and reread them all. For those of you who have read up to this point, if you’re interested in reading more about Thomas and Marsilia, I’d recommend the short story “Fairy Gifts” found in the novella compilation “Shifting Shadows.”

I’d like to thank Berkley Publishing Group, Patricia Briggs, and NetGalley for the chance to read and review a reviewer copy of Fire Touched.