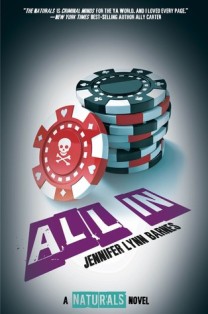 The Overview: Three casinos. Three bodies. Three days. After a string of brutal murders in Las Vegas, Cassie Hobbes and the Naturals are called in to investigate. But even with the team’s unique profiling talents, these murders seem baffling: unlike many serial killers, this one uses different methods every time. All of the victims were killed in public, yet the killer does not show up on any tape. And each victim has a string of numbers tattooed on their wrist. Hidden in the numbers is a code—and the closer the Naturals come to unraveling the mystery, the more perilous the case becomes. Meanwhile, Cassie is dealing with an equally dangerous and much more painful mystery. For the first time in years, there’s been a break in her mother’s case. As personal issues and tensions between the team mount, Cassie and the Naturals will be faced with impossible odds—and impossible choices. -Goodreads

The Naturals Series by Jennifer Lynn Barnes might be my favorite YA series of all time. I devour each new book with a passion I don’t experience often with books, having read so many. Here are just a couple of the many reasons why I LOVE it:

The concept!! The series revolves around teens who are ridiculously talented in certain areas useful to crime solving (emotion-gadgers, statistical-analysists, lie-detectors, and so on). What I love is that these talents are totally feasible (albeit rare), so it feels like reading about real-world superheroes. It fascinated me to no end to see their analytical skills put to the test. My favorite was probably Sloane – the statistician. She’s really quirky and endearing, but also incredibly smart, using numbers and statistics to predict where the killer would strike next, deciphering commonalities for whom the killer might target, and analyzing things like security camera footage to pinpoint criminals based on trajectory and all sorts of other complicated math that I only half pretend understand (;P). All In gave Sloane more of a spotlight and it was awesome to get to know her even better.

Basically, take these cool characters with cool talents and add to that a complex mystery, and I’m in love.

As if it wasn’t fun enough reading about these super talents, the mystery within each novel is what I think really draws me in. It’s nothing like those old Nancy Drew novels where the criminal is always the nicest persona in the book. In the Naturals series, the killer could literally be anyone, and Barnes does a masterful job of incorporating a lot of plausible misdirection to keep you guessing. When I read these novels, I always have SO MANY THEORIES about who the killer could be. And each new chapter gets me that much closer to figuring it out. It’s seriously the most engaged I’ve ever been in a book, making it also one of the funnest books I’ve ever read. Additionally, each book gets more complex without also getting more convoluted. There’s a different mystery in each novel, but they are all tied together by one big story arc (that’s also a complex mystery) which has gained so much momentum that I’m absolutely DYING to read Bad Blood (the final book in the series) which comes out November 1, 2016.

In fact, I think the reason I loved All In in particular was that it did an excellent job advancing the overall story arc while still giving me a killer mystery to help solve (I say “help” ironically… I didn’t do shit). All In also delved into a bit more background of The Naturals (the characters, as that’s how they refer to themselves) and you start to see even more how they ended up with such honed talents. Ugh, I really can’t say much more than that without dipping into spoilers, so I’ll leave it at that.

Overall, for any of you Criminal Minds fans out there, this is the series for you! This is one of my favorite books to recommend because 1) I love geeking out about it 2) it’s one of the most engaging books I’ve ever read and 3) I think it appeals to a wide range of readers. I call a lot of things my favorite, but I really, really mean it this time, haha. :)

The Body Finder by Kimberly Derting

All Our Yesterdays by Cristin Terrill

One comment on “Book Review: All In by Jennifer Lynn Barnes”