One Good Dragon Deserves Another by Rachel Bach 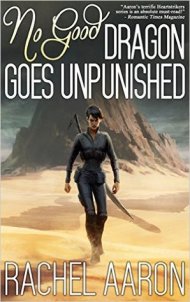 Rachel Aaron (who also writes as Rachel Bach) is easily one of my top ten favorite authors – I’ve read everything she’s published so far and have been blown away with every book (check out her Eli Monpress fantasy series and Paradox scifi series if you have a chance – you won’t be disappointed!). Then along came the Heartstrikers series – an urban fantasy about a clan of shapeshifting dragons and one who doesn’t quite fit in – and I was beside myself with excitement!

The coolest thing about Heartstrikers is that it’s a true hybrid of all my favorite genres. The story and presentation is very urban fantasy, but the dragons and other magical elements give it a low-fantasy feel. Also, even though it’s an adult series, it has that same accessibility and fun factor of a young adult novel. Regardless of how you classify it, the most important thing is that it’s a dang good series!

The books have so many interesting dynamics! Especially surrounding the characters. Starting the series, I thought they were all going to be pretty surface level. Fun to read about, but not much depth. Boy, was I wrong! Each book takes you deeper into specific characters and they just get more and more fascinating as time goes on. After finishing book 3, I’m agonizing that it’ll be at least 8 months before I can unravel even more mysteries about these great characters.

I also love the relationship between the two main characters, Julius and Marci. They are enamored with one another, but too uncertain and insecure to act on those feelings. It’s a dynamic I have never seen work well before, but Aaron found a way to make it charming rather than insufferable.

Last but not least, my favorite element of the books are the dragons. They’re every bit as powerful, greedy, and cruel as they are supposed to be, which is why Julius (a nice dragon) has so many problems fitting in. The dragons have strict hierarchy, lots of interfamily dynamics, and plenty of cultural backstory to make the society feel rich and well-rounded. For this reason, the world building gets top points in my book for creativity.

Overall, heartstrikers (particularly book 3) was one of my favorites of the year, and I highly recommend them to anyone wanting a fun series to read!

One comment on “Series Review [So Far]: Heartstrikers by Rachel Aaron”