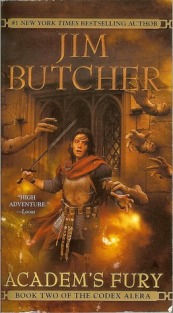 The Overview: For centuries, the people of Alera have relied on the power of the furies to protect them from outside invaders. But the gravest threat might be closer than they think. Tavi has escaped the Calderon Valley and the mysterious attack of the Marat on his homeland. But he is far from safe, as trying to keep up the illusion of being a student while secretly training as one of the First Lord’s spies is a dangerous game. And he has not yet learned to use the furies, making him especially vulnerable. When the attack comes it’s on two fronts. A sudden strike threatens the First Lord’s life and threatens to plunge the land into civil war. While in the Calderon Valley, the threat faced from the Marat is dwarfed by an ancient menace. And Tavi must learn to harness the furies if he has any chance of fighting the greatest threat Alera has ever known . . .   -Goodreads

I liked Furies of Calderon (the first book in the Codex Alera series) but thought it was pretty average compared to other works in the genre. Academ’s Furey, on the other hand, was AMAZING!!!

Seriously – I couldn’t put it down! It delivered on every promise made in the first book and completely blew me away with its stellar pacing, fantastic battle scenes, exceptional characters, and overall creativity. I felt like my heart was ripped out a few times while reading it and I love it when a book can make me feel that engaged. I already liked Jim Butcher, but this book launched him forward a few more notches in my book.

If I had any criticisms, it’s that the main character was sometimes more suave and resourceful in difficult situations than I thought believable… but it did make for some excellent and memorable moments, so I won’t complain too much. :-)

Overall, if you are on the fence with whether to start the series or continue on after the first book (like I was), take it from me – totally worth it!

Heart of the Mirage by Glenda Larke

The Name the Wind by Patrick Rothfuss