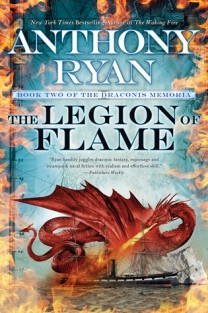 The Overview: For centuries, the vast Ironship Trading Syndicate relied on drake blood–and the extraordinary powers it confers to those known as the Blood-blessed–to fuel and protect its empire. But now, a fearsome power has arisen–a drake so mighty that the world will tremble before it. Rogue Blood-blessed Claydon Torcreek, Syndicate agent Lizanne Lethridge, and ironship captain Corrick Hilemore embark upon perilous quests to chase down clues that offer faint hopes of salvation. As the world burns around them, and the fires of revolution are ignited, these few are the last hope for the empire, and all of civilization. -Goodreads

The Waking Fire is one of the best books I’ve ever read – it felt like it was written just for me! Dragons, adventure, steampunk, and so much more – it was awesome! The Sandrunner short story that goes along with it has also been really good, but it’s not doing much to hold me over. I’m so excited for Legion of Flame, I can hardly stand it. Is it June yet?

WHO ELSE IS EXCITED?!!

4 comments on “Coming Soon: Legion of Flame by Anthony Ryan”