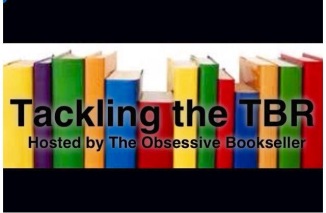 It’s once again time for my favorite feature: Tackling the TBR! There’s nothing I love more than picking out which books to read next, and this slightly organized method of reading has really amped my enjoyment to the next level. Bring on the mantras!

Read the best books first.
&
Life is too short to read books you’re not enjoying.

However you put together your TBR for the next month, the goal is to reduce the amount of obligation in reading and increase the fun.

Here’s a look at how the system works:

1. Identify the titles that take top priority in your TBR.
2. Combine them all in your own Tackling the TBR post.
3. Throughout the month pick from that pile as the mood strikes you.

Legion of Flame by Anthony Ryan

The Fiercest Joy by Shana Abe

The Green Rider is a Buddy Read with Goodreads group, which should be fun (come join us!). Other than that, I’m SO EXCITED FOR THE LEGION OF FLAME!!!! That get’s top priority, closely followed by Shana Abe’s Fiercest Joy, as it’s the final book in a YA dragon-ish trilogy that has finally been published!

Neverwinter by R. A. Salvatore

The Operator by Kim Harrison

The Queen of Blood by Sarah Beth Durst

The Willful Princess and the Piebald Prince by Robin Hobb

Voyage of the Basilisk by Marie Brennan

The Dragonbone Chair by Tad Williams

A Gathering of Shadows by V.E. Schwab

Okay, it’s a good thing I have a catch-up month scheduled for June… Ima need it. :)

A Questionable Client by Ilona Andrews

I’ve decided my goal going forward is to progress and finish as many series as I can from my top priority list (as written out in my Incomplete Series Challenge on Goodreads). I’m certain I will still start new series (I can’t help myself), but if I can get through at least half of my high priorities, I’ll be a happy camper. :)

What books are you Tackling this month? Even if you don’t specifically use my system, feel free to share your versions of how you manage your TBR pile (and the links to your posts if applicable) in the comments. :)