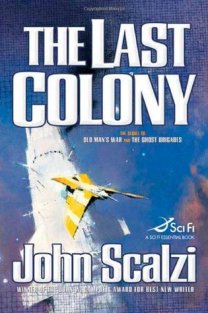 That is, until his and Jane’s past reaches out to bring them back into the game–as leaders of a new human colony, to be peopled by settlers from all the major human worlds, for a deep political purpose that will put Perry and Sagan back in the thick of interstellar politics, betrayal, and war. -Goodreads

This is the point in the series where the story needed to make me fall in love with it as much as the first book did. Coming off a decent, albeit underwhelming second novel (Ghost Brigade), I wanted Last Colony to evolve into a series I could endorse as passionately as The Expanse. Alas, while I was thoroughly entertained from start to finish, the book did leave a few points to be desired.

My biggest complaint is the lack of description. Scalzi has all of these interesting alien species, but I’m at the halfway point in the series and couldn’t begin to tell you what they look like. I love myself some xenobiology, but I feel the author has taken what should be a selling point to the series and glazed over it with ambiguity.

At least Last Colony saw the return of my fav, John Perry, and an interesting convergence of storylines from the first two books. The humor came back in force and played a huge factor in my overall enjoyment.

At the end of the day, while I’ve concluded there are some weaknesses to this series, all the strengths add up to give me an easy sci-fi,  perfect for a light reading mood. My Fantasy Buddy Reads group on Goodreads has called it “hefty fluff” or “fluff-plus” and I don’t think it inaccurate. I would definitely recommend it anyday for someone in the mood for a bit of fun.

4 comments on “Book Review: The Last Colony by John Scalzi”