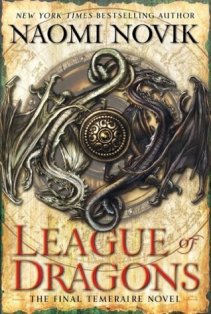 The Overview: The deadly campaign in Russia has cost both Napoleon and those allied against him. Napoleon has been denied his victory…but at a terrible price. Lawrence and the dragon Temeraire pursue the fleeing French army back west, but are demoralized when Napoleon makes it back to Paris unscathed. Worse, they soon learn that the French have stolen Temeraire and Iskierka’s egg. Now, it is do or die, as our heroes not only need to save Temeraire’s offspring but also to stop Napoleon for good! -Goodreads

Whelp, I finally finished this series. I can’t say League of Dragons knocked my socks off, but that’s pretty much par for the course for most of the series. The conclusion had a lot of fun story components, but ultimately it lacked any sort of momentum.

I think I was expecting more of a climactic ending. Anything, really, to make me FEEL something… but League of Dragons was just as casual in its events as most of the books before it. Things got going towards the last 25% of the book, but it didn’t carry out. Just my imaginings on what I thought could happen were more eventful, and I’m generally not very creative when it comes to plot design.

Saying I didn’t feel anything at the series ending isn’t precisely true. I felt a bit sad that I wouldn’t get anymore time with Temeraire and the other dragons. They’re really where the magic of the series lies, and I’ll miss the fun they brought. If you could par everything down to just the bits involving them, you’d have pure gold. They exude personality and animation, with this humorous, sometimes frustrating practicality that only Novik’s dragons embody. I love that their rationale and thinking is so different than ours. It makes them authentic. And delightful. They saved some of the slower books entirely for me and they’re the only reason I don’t feel remorse at spending so much time with this series. They’re also why I’m continuing to recommend at least the first three books.

I look at this series with affection, despite its flaws, but it definitely isn’t perfect. As I’ve mentioned, it’s missing a sustainable plot beyond the first three books, but it also suffers from lack of character depth. We very seldom get more than a surface-level emotion or reaction from the characters. Novik is usually more focused on what’s happening than what it feels like to go through it. The descriptors help us know the characters are feeling things, but beyond the first trilogy I never felt anything but arm’s-distance as a reader.

Recommendations: overall, despite a few flaws, I think the series is worth reading. I only felt a deep connection to the first book, and found rest to be fun, light reads with not much depth. So if you’re going to read fantasy fluff (beyond the first three books, which I believe was only initially intended to be a trilogy but got picked up for more because of its popularity), choose this one because, you know, dragons!!

A Natural History of Dragons by Marie Brennan

7 comments on “Book Review: League of Dragons by Naomi Novik”