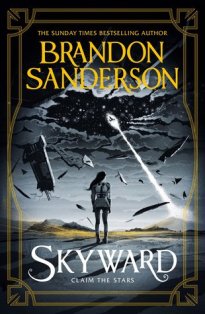 The Overview: Defeated, crushed, and driven almost to extinction, the remnants of the human race are trapped on a planet that is constantly attacked by mysterious alien starfighters. Spensa, a teenage girl living among them, longs to be a pilot. When she discovers the wreckage of an ancient ship, she realizes this dream might be possible—assuming she can repair the ship, navigate flight school, and (perhaps most importantly) persuade the strange machine to help her. Because this ship, uniquely, appears to have a soul. -Goodreads

Skyward is an easy book to recommend. It’s a YA sci-fi adventure filled with great characters, lots of action, and plenty of snark that will appeal to the masses.

Two things about this book made it stand out to me: the abundance of training and battle scenes involving many fun members of a flight team, and how much I liked Spensa. I love learning new things from books that you can’t actually learn in the real world. How to fly spaceships (okay, not totally out of the realm of possibilities, but still…) and how to engage alien fighters in combat. The characters were great – I especially appreciated all the animated profiles and how they worked together as a team. I loved Spensa as a main character. She has an interesting backstory that fuels her determination – a trait that’s really attractive to me. She’s the type of character you can always trust to make things happen, for better or worse (meaning there’s never a dull moment). And she’s also a character willing to grow through each experience despite being incredibly stubborn….

The story is especially good at unveiling mysteries as it progresses. The more you find out what’s going on, the more questions you have. But the trickle of information is just enough to keep you page turning, but not so tight that you get frustrated (Maze Runner series, I’m talking to you). I had a bunch of theories while reading (none of which panned out… so far), but I liked the fact that the book was engaging enough to get me thinking beyond the words right in front of me.

I remember reading that this series is Sanderson’s creative re-imagining of a classic dragonriding story (he didn’t think he could bring anything new to the idea, so he went another direction completely… a direction involving a young girl’s determination to become a fighter pilot, sassy AI spaceships, and lots of alien ship battles. I definitely could see the influence, but everything else was just pure Sanderson awesomeness.

Recommendation: Sanderson books are always easy to recommend – his baseline quality is incredibly high. Yet Skyward is even easier than most because of its wide age-range appeal. It’s very accessible, with a great balance of silly humor, heavier problems, and loads of action to keep most readers engaged. As long as you’re even mildly interested in sci-fi, this is a great pick. I wish it had been around back when I was a bookseller because it would’ve made hand-selling during the holidays a bit easier.