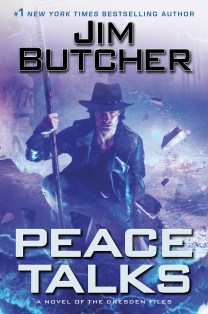 The Overview: When the Supernatural nations of the world meet up to negotiate an end to ongoing hostilities, Harry Dresden, Chicago’s only professional wizard, joins the White Council’s security team to make sure the talks stay civil. But can he succeed, when dark political manipulations threaten the very existence of Chicago–and all he holds dear? –Goodreads

Peace Talks was everything I hoped it would be and more. Totally worth the wait! ^_^ Especially because we’re getting TWO Dresden novels this year (Battle Ground is currently slated for release September 29th!).

The last few Dresden novels have been hit or miss. Ghost Story and Cold Days were by-far my least favorite books in the series. I briefly considered abandoning it, but then Skin Game (possibly the best of the series – PARKOUR!!) came along and fuego! – total re-ignition. I didn’t know what to expect after so much time between books, but luckily Peace Talks was more of all the things that make this series great: good characters, funny dialogue, supernatural politics, lots of magic, and stakes that keep getting higher and higher. It’s a relief because I wasn’t sure I liked the direction the story has been heading in the last few books. Butcher jumped the shark at some point and I was afraid it was going to get too far from the original essence of the story while dealing with the multidimensional shit. It didn’t. Instead it struck a nice balance between the familiar and the new concepts.

The book did take a bit of time for gentle reintroductions to the characters, but it wasn’t distracting. Frankly I could’ve used more reminders on the differences between the white court, the red court, the winter court, the summer court, etc. I’ve got most of it straight, but still get lost on occasion with anything to do with the fae. That’s more of an attention span thing though – early on in the series, all the evil beings sounded and acted the same so I never bothered to get them straight. Now I’m paying for being lazy because they’ve stuck around. Anyway, Peace Talks wasn’t as action-packed as Skin game, but it more than made up for it with political intrigue and plot-advancements between key characters. There were definitely a few “omg!” moments. The story arc didn’t feel as robust as some of his other books, but that’s probably why we’re getting another novel this year. I’m ready for that one to knock me on my ass.

Really, the only thing that would’ve made my reading experience of Peace Talks better is James Marsters crooning to me on the audio version. Other than that, it was awesome!

Recommendations: Dresden continues to be an absolute joy to read, and seems to embrace its flaws to the point where it wouldn’t be a satisfying Dresden novel without them (they’re not so much flaws anymore as trademark Dresden-isms). If you haven’t read this series yet and are even mildly interested in the genre, it’s a great pick (give it until at least book 4). Oh! And if you haven’t had a chance to read the novellas yet, now would be a good time to pick up the Bigfoot ones before diving into Peace Talks. ;)

I’d like to thank Berkley Publishing Group, Netgalley, and Jim Butcher for providing an early review copy of Peace Talks – you made my year!

The Alloy of Law by Brandon Sanderson