The Overview: Enter an epic fantasy world that echoes with the thunder of muskets and the clang of steel—but where the real battle is against a subtle and sinister magic…. Captain Marcus d’Ivoire, commander of one of the Vordanai empire’s colonial garrisons, was resigned to serving out his days in a sleepy, remote outpost. But that was before a rebellion upended his life. And once the powder smoke settled, he was left in charge of a demoralized force clinging tenuously to a small fortress at the edge of the desert. To flee from her past, Winter Ihernglass masqueraded as a man and enlisted as a ranker in the Vordanai Colonials, hoping only to avoid notice. But when chance sees her promoted to command, she must win the hearts of her men and lead them into battle against impossible odds. The fates of both these soldiers and all the men they lead depend on the newly arrived Colonel Janus bet Vhalnich, who has been sent by the ailing king to restore order. His military genius seems to know no bounds, and under his command, Marcus and Winter can feel the tide turning. But their allegiance will be tested as they begin to suspect that the enigmatic Janus’s ambitions extend beyond the battlefield and into the realm of the supernatural—a realm with the power to ignite a meteoric rise, reshape the known world, and change the lives of everyone in its path. -Goodreads

Thousand Names was an unusual military fantasy, but I quite liked it.

First off, it’s clear that magic is going to be an integral part to the overall mechanisms of the series and the conflicts within, but it’s presence in this first book was next to nil. If you pick this up, go in expecting a bonafide flintlock military story set in a fantasy world, and NOT expecting battles with mages flinging spells left and right (as I’d been).

I especially enjoyed the beginning where this army’s leaders were trying to shape a ragtag group into something reputable. That was my favorite aspect of the story, and unfortunately it was dropped a bit soon in favor of focusing on the characters and their wide array of strange conflicts. I enjoyed the transition to the characters and the journey with them, but missed that initial selling point throughout the rest of the novel. This gradual transition of story (which happened at a couple of junctures throughout the book) is part of the reason why I called it “unusual.” Nothing quite panned out as expected, but it was written well, so in this case it still managed to create a satisfying story.

I’m still trying to figure out how I feel about the military aspect of this book. My knee-jerk reaction was that the battle scenes were meh, just okay. They didn’t have a lot of human connection during, but rather seemed an endless barrage of logistics descriptions. This unit moved here, this person got shot, etc. and what was missing for me were honed-in perspectives to really make me feel something for what was happening. I think part of my disconnection was because I had just finished Abercrombie’s Age of Madness trilogy, which is riddled with some of the best battle scenes I’ve ever read. By comparison, these lacked the same spark. However, had I read them further apart, I may have enjoyed this more. The feedback I’ve gotten since first discussing my experience with this book is that most people generally liked the battles and thought them done well. I will say at least that they were quite easy to visualize, but the level of detail required for that could be both a good and a bad thing… my jury is still out.

It’s an oddly character-driven novel, and for the most part I enjoyed my experience with them. They weren’t quite as in-depth or introspective as I’d wanted, but are still the types of profiles I think I’m going to have fun rooting for while reading the rest of the series.

Overall, I’m glad I finally got around to reading this and look forward to continuing on in the series.

Recommendations: pick Thousand Names up aware that this first book is more “military” than “fantasy” and enjoy Wexler’s unconventional approach to the genre. I can see why it’s hailed as a staple flintlock fantasy.

Title: Ashes of the Sun

The Overview: Long ago, a magical war destroyed an empire, and a new one was built in its ashes. But still the old grudges simmer, and two siblings will fight on opposite sides to save their world, in the start of Django Wexler’s new epic fantasy trilogy. Gyre hasn’t seen his beloved sister since their parents sold her to the mysterious Twilight Order. Now, twelve years after her disappearance, Gyre’s sole focus is revenge, and he’s willing to risk anything and anyone to claim enough power to destroy the Order. Chasing rumors of a fabled city protecting a powerful artifact, Gyre comes face-to-face with his lost sister. But she isn’t who she once was. Trained to be a warrior, Maya wields magic for the Twilight Order’s cause. Standing on opposite sides of a looming civil war, the two siblings will learn that not even the ties of blood will keep them from splitting the world in two. –Goodreads

Although there were a lot of things I really enjoyed about Ashes of the Sun, I didn’t like it as much as I think I should have… and I can’t quite pinpoint why. From an evaluation standpoint, it had all the elements I expect from a high fantasy: intriguing world-building, great characters, an interesting plot, good pacing, and a more than adept writing style. It had a good mix of exciting action scenes and slower character development moments. So what’s my malfunction?

I think part of the problem may have been the audiobook narrator. In some ways the characters felt over-performed, coming across as more caricatures than real people. On one hand it set the tone for cheeky characters who I think were supposed to bring a bit of lightheartedness and fun to the novel (which they did), but on the other hand it made a couple of them come across a bit juvenile even though on paper they were actually pretty badass. The final nail in the coffin in this regard may have been how recently I’ve read Wexler’s YA Ship of Smoke and Steel. Both female leads, Maya (AotS) and Isoka (SoSaS) were a bit more similar to each other than I’d have preferred.

Also, based on the name of the series and where the story culminated, it kind of read like a prequel.

Also, also, I don’t know who had the idea first, but the magical constructs in the book were very, very similar to the villain in season 3 of Stranger Things. It’s entirely possible both ideas originated organically (much like the monsters themselves, lol), but either way the timing is quite unfortunate. Had I read this a year ago I think it would’ve come across a tad more original.

Okay, so on to the things I liked, which were plentiful. The world-building. Perhaps not completely original, but the framework for the story – an empire still suffering the after-effects of a war for power fought hundreds of years ago – set a wicked cool atmosphere with a city divided into factions, underground vies for power (often literally underground), and ongoing biases of politics. I loved the expansive feel of some of the settings and felt completely satisfied at how much Wexler helped me explore in this first book. It also added another great dynamic that the main characters fought on opposite sides of the conflict.

Another thing I liked was the overall character construction and how the author treated them. The beginning had a lot of great camaraderie, which really connected me to the characters. I like that he gave some of the minor characters a bit of a spotlight here and there because the way he did it felt unconventional. I’m not sure I liked where the story headed for many of them because I’m trying to wrap my head around what to expect in the sequel, but for this novel alone it was great.

So overall I’m battling between a rating based on comparable merit (solid 4 stars) and my own personal enjoyment of the book (3 stars). There were parts that had me glued to it mixed with others that had me wondering if I should consider a DNF. I’m going to split the difference with a 3.5 rating with the disclaimer that I think others will enjoy it a lot more than I did. It has a lot of things going for it.

Sins of Empire by Brian McClellan

Way of Shadows by Brent weeks 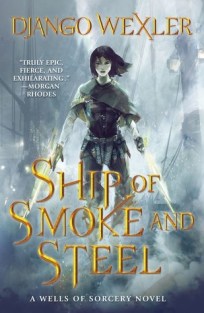 Title: Ship of Smoke and Steel

The Overview: In the lower wards of Kahnzoka, the great port city of the Blessed Empire, eighteen-year-old ward boss Isoka comes to collect when there’s money owing. When her ability to access the Well of Combat is discovered by the Empire—an ability she should have declared and placed at His Imperial Majesty’s service—she’s sent on an impossible mission: steal Soliton, a legendary ghost ship—a ship from which no one has ever returned. If she fails, her sister’s life is forfeit. -Goodreads

I love it when high fantasy authors transition to YA. Their stories are always much more robust than other books in the genre because they’re used to creating expansive worlds, complex characters, and detailed plots for their audience.

Wexler didn’t dumb things down, but he did pull a few punches to make the story more accessible… but not by much. There’s some grit here (older teen appropriate), and I appreciated how ruthless the main character was right out of the gate. She surprised me a few times, and that’s difficult to do these days.

The concept sold me right away. A “ghost” ship riddled with monsters that’s more or less a lifelong prison to anyone who boards it. It provided an eerie atmosphere, and was definitely memorable. I’ve read so many high-seas fantasy novels… it’s nice to find one with a unique twist. The swordplay was also a highlight – you can tell Wexler enjoys writing fight scenes because he does them well.

My least favorite aspect of the story was the sentimentality, oddly. Although it showed some meaningful character growth, the main character got a little too soft for my tastes, especially since there are more books to come in this series. That said, at least it was a gradual cracking of her hard demeanor. I also thought the magic system was vastly underplayed to the point where I don’t think I could even describe how it works.

This is my first Django Wexler, and it definitely won’t be my last. I’m interested in the sequel to this book, but I’m more excited about starting his Shadow Campaigns fantasy series, now that I know I like his writing style.

Recommendations: this is a gritty breath of fresh air for the YA fantasy market. I’d hand it to older teens and adults, especially ones who don’t want romance as the main focus (although it does contain some). Y’all will have to let me know how it compares to Wexler’s high fantasy works!

Way of Shadows by Brent weeks