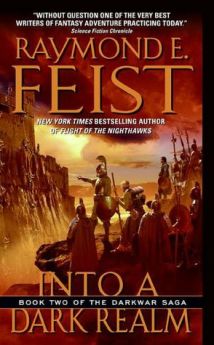 Title: Into a Dark Realm

The Overview: The Conclave of Shadows has smashed the Nighthawks’ dread plot to destroy the Empire of Great Kesh, but the mad sorcerer Leso Varen hides on the world of Kelewan, and vicious Dasati warriors mass to invade. Sorcerer Pug, Magnus, Nokor, and disturbing Bek, full of bloodlust and uncanny strength, seek the solution in the heart of the Dasati Empire.

Feist’s works are always impeccable and I’m hard-pressed to identify anything I don’t like in his stories. “Into a Dark Realm” was no exception, and in fact exceeded my expectations with its creativity and complexity.

What I liked about it was the total transportation into another realm. It provided a culture immersion that I haven’t really seen since his “Daughter of the Empire” trilogy written with Janny Wurts. This time, however, the world we got to explore was of another dimension -that of the Dasati. Following a male warrior from that evil and twisted world, we get to learn the mentality behind their rather brutal lifestyles. I really got caught up in the fascinating culture offered within this book, and found it to be one of my favorites in the entire saga.

As always, the characters are well-rounded with a nice balance between long-time beloved characters and the introduction of new ones. The story bounces back and forth between the multiple plot-lines seamlessly, maintaing my interest with each transition.

Overall, for the middle book in a trilogy, it advanced the plot nicely – revealing just enough to help build the momentum towards what promises to be an amazing conclusion!