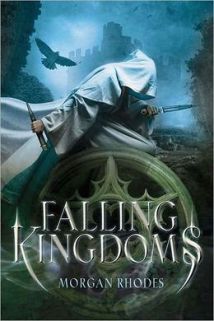 The Overview: In a land where magic has been forgotten but peace has reigned for centuries, a deadly unrest is simmering. Three kingdoms grapple for power—brutally transforming their subjects’ lives in the process. Amidst betrayals, bargains, and battles, four young people find their fates forever intertwined.

The cover and overall idea for Falling Kingdoms grabbed my attention as soon as it came out of the box. I immediately stopped what I was doing and thought, “Oooh! I definitely want to read this!” Having finished it just last week, I’ve been trying to figure out why I didn’t like it as much as I thought I would…

There was nothing particularly “wrong” with the book: the characters were well-rounded and interesting, the overall plot line was well-woven, and the writing style left me nothing to complain about. What’s more, I think a lot of people out there are really going to enjoy the story and get behind some of these characters. The book is being advertised as a sort of hybrid between the Game of Thrones Saga and Graceling, and that’s exactly what it read like. For some reason, however, it just didn’t quite work for me. I’ll spend a lot of time in the following sections illustrating why, but suffice to say I’m disappointed I didn’t get more from January’s selection.

[Spoiler Alert! You may want to skip down if you haven’t read the book yet]

Pieces of Game of Thrones and Graceling definitely make an appearance in this novel, and with two such great draws for inspiration, this book could’ve been fantastic. I actually think Rhodes did a good job incorporating both stories, but I feel like she left out the best elements that made each of the books so special.

Graceling is an adventure involving teens doing extraordinary things to save their kingdoms and that is certainly present here, but it is also one of the most memorable love stories I’ve ever read and the main reason why it’s one of my favorites. Within Falling Kingdoms, I didn’t feel more than an ounce of relationship development throughout the whole thing, even if you count the incestuous stuff. Cleo and Theon had some potential, but even then readers were told they were falling in love and never shown until right before he was killed. For a teen book, I feel as though this was her biggest missed opportunity. There are ways to incorporate a love story without making it gushy.

Game of Thrones, on the other hand, had a highly original perspective and was told with a bit more of an edge than was typical within the genre. There were also many moments of unexpected events which added to the overall appeal and suspense of the story. Falling Kingdoms copied Martin’s multiple storylines format, took the edge out to make it accessible for teens, and brought in unexpected elements that I feel hurt the plot more than it helped.

I thought the world-building was pretty much non-existent. Sure, there was a bit of cultural development, but everything else was fairly generic. I kept getting the impression that Rhodes didn’t pay any attention to the physical geography of this world. There are supposedly three separate distinct cultures living in partitioned areas (ruled by individual monarchs), yet it seemed to take only a few hours to travel between each kingdom. I just don’t see how the cultures could’ve remained independent, or for that matter, have enough people within for three kings to rule within such tight parameters. And, speaking of people, other than the main characters, there was really nobody else around… where are the subjects these three kings are trying to rule over? Anyway, I really missed this element of the story and hope the author spends some time on creating atmosphere in future books.

Because of the choices she made within the plot – specifically killing off characters and following too many story-lines at once, the whole book read like one giant, glorified prequel. At no point during 95% of the book was I sure who I was supposed to rooting for and against (for that matter, I’m still not totally sure). The excellent prequel started with Sabina killing her sister, giving readers and interesting villain right off the bat. Just when we started learning where her story was going to develop, Rhodes killed her off, leaving readers relatively villian-less halfway through the book.

As for the heroes, Cleo has somehow emerged as the one with a quest before her, yet I feel as though Lucia’s developing magic (and the tension between her and her brother) is the real driving force behind story. I can’t help but wonder what it would have been like to read two totally different books following each storyline because I actually think they’re stronger on their own. Concerning the others, Jonas’ motives for revenge were a tad irrational for me, and we really don’t get to see what type of thinker he is until the end of the book. We also never get to see Ioannes’ motives in the first book, and what little we know about him got flipped near the end anyway. Hence, an excellent prequel for the story that’s actually starting in the next book.

As mentioned earlier, there’s nothing I can criticize about Rhode’s writing style. In fact, had the plot decisions not detracted from the book as a whole, I would probably be praising her for certain elements at this point. She did a great job of showing the inner turmoil and duality of all the various characters, making it easy to get on board and feel for their plights.

On a minor note, there was an awful lot of false tension and “soon to be revealed” secrets in this book. I believe she was trying to build suspense and keep people turning pages, but I’m the type of reader that likes to have as much information up front as possible. Secrets are great, but if the protagonist knows something, I’d like to know it too. It helps explain motives and reveal character which allows me to fully invest myself into their struggles.

I will say that the prequel to this book was incredibly grabbing! After reading it, I hunkered down thinking “this is going to be epic! I’d better get comfortable…” Fifty pages and a dozen characters later, I was half asleep waiting for the story to start. Too many characters make it very difficult to get the plot moving. It also can steal away momentum further along because the author constantly has to drag the reader back and forth between characters. It is a risky tactic, as you are literally giving your readers permission to have a short attention span with your work. You also take the risk that readers will get bored with one or another of the characters (mostly because this format doesn’t allow you time to develop each one fully, and readers aren’t sure who to invest their attentions in). I know many people who have admitted to skipping entire chapters when this happens, particularly with J.R. Ward and George R.R. Martin books. I’m not saying it can’t work, I’m just saying it’s a risk an author needs to consider when outlining.

Overall, I wish I could’ve had more positives for this book. I have the tendency to be harsher on books that I’ve been looking forward to, and I think that might have been the case here. I am honestly hoping for one of you to reply with: “You’re crazy, this book was amazing!” because I feel like I might’ve been a bit hyper-critical of it. In any case, I hope I like next month’s selection (Drowning City by Amanda Dunham) a bit better.

I love composing these reviews, but I’m most looking forward to hearing what YOU thought of the book:

Thank you for your votes!

This month’s winner is… “Falling Kingdoms” by Morgan Rhodes!

A thorough review for this title will be posted on February 1, so there’s plenty of time to pick it up if you want to participate. I am super excited to read this one and look forward to hearing what all of you thought about it as well! :)

Don’t forget to tune in tomorrow for the review and discussion of December’s Selection: “Warbreaker” by Brandon Sanderson.

“If you think reading is boring, you’re doing it wrong.”