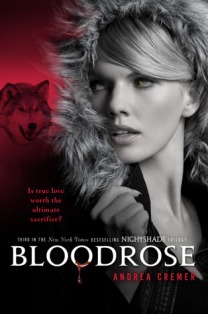 The Overview: Calla Tor wakes up in the lair of the Searchers, her sworn enemy, and she’s certain her days are numbered. But then the Searchers make her an offer–one that gives her the chance to destroy her former masters and save the pack–and the man–she left behind. Is Ren worth the price of her freedom? And will Shay stand by her side no matter what? Now in control of her own destiny, Calla must decide which battles are worth fighting and how many trials true love can endure and still survive. -Goodreads

Bloodrose provided the most adventure yet. Cremer used several exotic settings as hiding places for the mythical weapons the characters had to retrieve (which was probably my favorite part of the book). The seek and find adventure kept me engaged through most of it, and I thought the story escalated to a fitting climax. Although I admit I have mixed feelings about the story-ending itself.

There’s really not much left to add. As I mentioned in my reviews of Nightshade and Wolfsbane, the real beauty of this series are the characters and the fun dynamics they have with one another. All characters were written well, but there was one that I just could not stand – Shay (one of the love interests). Any scenes involving him set my teeth on edge and definitely stole a bit of my enjoyment for the story. This final book also had a lot of boy angst, which, although consistent with story, might have been a little too much for my tastes.

Overall, I’d recommend Nightshade series, but would take caution handing it to younger teens (it kind of encouraged underage sex). That said, it’s still one of the better teen werewolf books I’ve read and I definitely enjoyed Cremer’s writing style.

The Overview: Calla Tor wakes up in the lair of the Searchers, her sworn enemy, and she’s certain her days are numbered. But then the Searchers make her an offer–one that gives her the chance to destroy her former masters and save the pack–and the man–she left behind. Is Ren worth the price of her freedom? And will Shay stand by her side no matter what? Now in control of her own destiny, Calla must decide which battles are worth fighting and how many trials true love can endure and still survive. -Goodreads

I read Nightshade as an ARC back before it was released in 2012 (and loved it). I’d always had the best intentions to continue on, but before I knew it the entire 6 book saga had been written and I’d gone from way ahead to laughably behind. So I reread the first book in 2014… then never got back to it again(:/). Anyway, I’m glad to finally be continuing on because it’s a fun series with memorable characters, a cool concept, and great writing.

The biggest take away from this book were the characters. I got the impression that Cremer had a lot of fun creating them. All the characters are interesting and well-rounded on their own, but the real brilliance is how they interact and build off of one another – the dynamics are a blast to read. This series is great because it gives equal attention to being both plot and character driven.  There were only a couple of places where I thought the dialogue might be trying too hard, but they were few and far between.

While Nightshade focused on the Guardians (the werewolves) and the Keepers (the authoritative magic-users), Wolfsbane dealt more with the Searchers (the anti-Keepers, for lack of a better description). I LOVED all the settings and stories involving the Searchers – they live in a glamorous academy/training facility where they learn how to use magic and fight (O_o!). Cool, right? But we really didn’t get to see more than a surface-level description of this place – I want to experience SO MUCH MORE!!! So hopefully (fingers crossed) the prequel series expands on it, otherwise what an opportunity wasted.

Okay, now for some boy talk: in most teen series, I find both options in a love triangle fairly equally appealing (say, 60/40). In this case, however, I CANNOT STAND SHAY. Like, at all. Here are my reasons:

And then you have Ren who is loyal, unselfish, and protective without being overbearing. He has flaws to, but they aren’t in relation to how he treats Calla. Anyway, I think my point of this rant is, go team Ren. Also that I think my overall enjoyment of this series would increase if I liked Shay more than I do. It has been a bit difficult getting behind a romance I’m not feeling…I roll my eyes a lot, is all I’m saying.

Overall, Wolfsbane was a very entertaining sequel and I’m excited to see what happens next… Hopefully it won’t take me another couple of years to continue on, lol.

The Overview: The first time I read this book was several years ago when it was just an arc. I remember liking it enough to want to continue on, but by the time the second book came out I had forgotten almost everything. In my defense, I read the arc several months before the first book’s release date, and then it was well over a year and a half before I got my hands on the next installment. I always knew I wanted to go back and reread, but it kind of got put on the back burner. Earlier this year, however, I finally found the motivation I needed to pick it back up. You see, my book blogging friend Chanzie at Mean Who You Are had made it one of her nominations for people to vote for as her Book of the Month. We ended up having a read-along, and it was so much fun I can’t wait to do another! In any case, I want to thank her for getting me back on this series because, while I appreciated it the first time around, I absolutely loved it the second time!

This is actually my second time reading Nightshade, and I liked it much better this time around. I have to thank Chanzie over at Mean Who You Are for letting me read along with her chosen Book of the Month because I think without her it would have been a very long time before I picked this series back up… not to mention the read along itself was a ton of fun!

I can’t say enough good things about the writing style – Cremer has such a strong voice, and the way she put together words to describe even the most mundane things was beautiful. I’m not saying she was flowery with her descriptions, by any means, I just appreciated how she composed her sentences. Even to the point where I’d be willing to read just about anything she writes because I’m certain the craft side of it would be done beautifully. Come to think of it, when I first read Nightshade, I was not the aspiring writer I am today… I think we may have figured out why I liked it a whole lot better the second time around. Isn’t it weird how books can do that to you?

One thing my pre-writing self and I agreed on is that the characters in this book are a lot of fun. Even though they’re not incredibly dynamic yet (I have high hopes for the second book), they are interesting and easy to get behind – their conflicts really tug at your heartstrings. Let’s take a moment for some girl talk: my first inclination was to crush on the new boy in town, Shay. In fact, during the first read through I did just that. Now, however, I have found a new appreciation for Ren, the boy who Calla has known since she was a child – the one she’s supposed to marry. Each boy has flaws, which is what makes them realistic characters, but the unfortunate thing is that the flaws are kind of deal-breakers for me in the relationship department. Shay’s actions tell me he’s not as concerned with Calla’s safety as I think he should be (it’s not malicious, but he does take a lot of risks where she would pay the price) whereas Ren is kind of a man-whore (but I at least think he’d be loyal to Calla). Five years ago, Ren’s promiscuity threw me off immediately, whereas now Shay’s actions bothered me more. Anyway, to make a long story short: go team Ren! While I’m on the subject of characters, I should also mention that the secondary characters (primarily the fellow pack-mates) were fantastic. I was just as interested in their conflicts as I was the main character’s and am really excited to see how things change for them going forward.

The only thing I could say I didn’t like about this book is that its beginning was a little too much of a whirlwind. It was difficult for me (both times) to wrap my brain around what was happening and I got slapped over the head with what felt like a major instalove. My advice is to stick with it. It only takes a couple of chapters before it transitions into a highly entertaining story. I have read a lot of werewolf books, but I’ve never read one quite like this. :-)

Overall, Nightshade is an excellent start to this series and perfect for fans of teen paranormal. If you can be forgiving for the first couple of chapters, you are in store for excellent writing, great characters, and a cool concept!

I’m delighted to finally be participating in Waiting on Wednesday posted by Breaking the Spine. “Coming Soon” is a feature I’ve been doing since I started the blog a year ago, but somehow it seems more official now that I’m a part of the WoW network. My selection this week is:

The Overview: Fans asked for it, and now they’ve got it! Andrea Cremer is continuing the story she began in in her internationally bestselling trilogy: Nightshade, Wolfsbane and Bloodrose. In this new installment, Bosque Mar haunts the dreams of both Adne and Logan, trying to escape for the Nether, where Calla, Shay and the other Guardians trapped him in the final battle in the War of All Against All. Will he turn Adne to the dark side? Will Logan reclaim his birthright? And will darkness take over our world? In a novel filled with magic, romance and breakneck action, master storytelling Andrea Cremer’s newest installment will not disappoint!

I was lucky enough to snag an arc of the first book in the Nightshade trilogy and enjoyed it so much that I bought the next books in hardcover as soon as they came out. Now for my confession: they are still sitting unread on my shelf. This is not a knock on the first book – I really liked it and wanted to continue the series – I just got distracted. The release of this continuing trilogy gets me even more fired up about this author, and I fully intend to be ready for Snakeroot when it’s released in December!