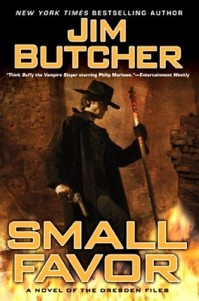 I can definitely see why Jim Butcher is considered a staple in the Urban Fantasy genre – he has an excellent main character (who is a tad whiny at times, but that’s kind of why I like him), loads of paranormal that will continually ding your creep-o-meter (even though I admit it doesn’t take much to set mine off), and plenty of action, humor, and intrigue. Overall, if you’ve never read an urban fantasy, this author is a great place to start. The best thing about him is that he seems to get better with each book.

I really liked Proven Guilty, and although it’s been a while since I read it, I still remember quite a bit about it. It sits nicely in a long line of great Dresden books, that’s for sure. This is the novel where you start to get to know Molly – Michael’s rebellious teenage daughter (and a character I quite like). The coolest part about this book is the plot: Molly and her boyfriend get mixed up in a phenomenon of horror movies brought to life. Dresden, as usual, has to figure out what’s going on. It was a mystery I enjoyed watching him unravel. Overall, a solid installment.

White Knight was my least favorite of the series so far (of the latter books, anyway… the beginning of the saga started out admittedly rough). That is, however, until I started writing this review. You see, the book as a whole was actually comparably good. The culprit for my dissatisfaction was a single, prolonged dream/alternate plain of existence scene right in the middle of the book that took me out of the action and added absolutely nothing to the plot. It was weird. Had it not been included, I’m sure I’d be sitting here praising White Knight with the same enthusiasm as the rest, but that one scene managed to leave the taint on the whole thing. Aside from that, the book was actually pretty entertaining – containing a mystery surrounding Thomas (whom I love), and a few hilarious moments. If you read it, just skip that weird part and all is good.

I actually liked Small Favor a lot. Like, enough that it may be my favorite of the series. Here’s where I have to admit that I’m composing this review way after reading the book and have already ventured on as far as book 14. It’s still my favorite so far… mostly because, in a long series where individual story lines start to blend together, I can still remember with vivid clarity everything that happened in this book. It had a great conflict right off the bat (a good start), and ended with one of the coolest battle settings so far (a good ending). Not to mention it was funny as shit. Consider book 10 Obsessive Bookseller endorsed.

If you haven’t picked up a Dresden book yet, just know you’re in for a well-conceived and sustainable series, jam-packed with scary monsters and a lot of snark. I consider them a must-try for any fan of the genre.

The Alloy of Law by Brandon Sanderson