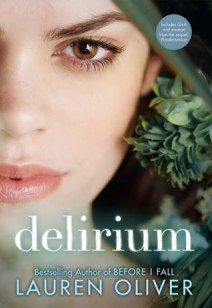 The Overview: In an alternate United States, love has been declared a dangerous disease, and the government forces everyone who reaches eighteen to have a procedure called the Cure. Living with her aunt, uncle, and cousins in Portland, Maine, Lena Haloway is very much looking forward to being cured and living a safe, predictable life. She watched love destroy her mother and isn’t about to make the same mistake. But with ninety-five days left until her treatment, Lena meets enigmatic Alex, a boy from the “Wilds” who lives under the government’s radar. What will happen if they do the unthinkable and fall in love? -Goodreads

The book takes place in a reality where love is considered a disease. Making you do things that don’t make sense and go against your better judgment. There are even physical signs – shortening of breath, increased heart rate; it can be dangerous. Don’t worry, though, because luckily, there’s a cure.

When I first picked up Delirium I was certain it would sound like every other YA on the market. No surprise: it does. Here’s the funny thing, though… I really liked it. There’s something incredibly absorbing about the author’s writing. A relaxed quality that makes you feel like you should be in a cozy chair with some tea while reading. I also found this true with her novel, Panic, which is even further away from my preferred reading genre, but I loved it also. Something about her storytelling just works for me.

I’ve heard a lot of people bash Delirium because, even though it’s a dystopian, it lacked the same edge people expect from comparable novels like Divergent and Hunger Games. It’s definitely more of a romance-heavy title (for obvious reasons, given the concept), which didn’t bother me too much in this first book. In fact, I’ve read it twice. The second time was in preparation to continue the series, but I never quite made it around to reading more… again. I think I’m worried it will go the route of most YA trilogies and give me an entire middle book of useless angst and very little plot progression. I also think, aside from a few side enigma characters I’d like to know more about, I probably have a pretty good idea where the story is going to end up, and am not sure I want to commit the time to get there. It’s weird lol. Maybe eventually I’ll finally pick up the rest of the trilogy, but for now I’m content to consider it an open-ended stand alone that I enjoyed immensely.

Recommendations: if you like the more fanciful, romance-driven YA dystopians, this is one of the better ones. There’s a whole sub-genre that I call “girls in pretty dresses in a slightly dystopic world” that I can’t seem to get enough of. This book has the same feel as those.

The Glittering Court by Richelle Mead