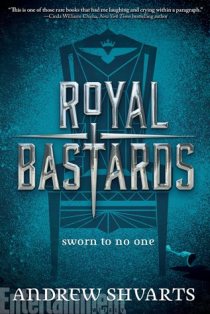 The Overview: Being a bastard blows. Tilla would know. Her father, Lord Kent of the Western Province, loved her as a child, but cast her aside as soon as he had trueborn children. At sixteen, Tilla spends her days exploring long-forgotten tunnels beneath the castle with her stablehand half brother, Jax, and her nights drinking with the servants, passing out on Jax’s floor while her castle bedroom collects dust. Tilla secretly longs to sit by her father’s side, resplendent in a sparkling gown, enjoying feasts with the rest of the family. Instead, she sits with the other bastards, like Miles of House Hampstedt, an awkward scholar who’s been in love with Tilla since they were children. -Goodreads

Royal Bastards is one of those books I had to resist from requesting on NetGalley (if you caught my ARC Management Tips: How to Avoid Over-Requesting post, you’ll understand why this is a big deal). It just looks so dang interesting! But luckily the release date is not that far off. It appeals to me on a few levels – the summary makes it sound cheeky, the context of the story promises a lot of mischief, and the overall “feel” I’m getting from the book is making me reminiscent of Locke Lamora (Lynch), Kvothe (Rothfuss), and Jimmy the Hand (Feist). It’s probably a little unfair to expect so much from a YA debut, but if it’s half as good as these other works, I’ll be happy. :)

Has anyone read this yet? Thoughts?? 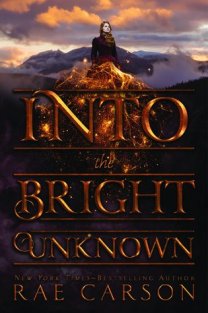 Title: Into the Bright Unknown

The Overview: Leah Westfall, her fiancé Jefferson, and her friends have become rich in the California Territory, thanks to Lee’s magical ability to sense precious gold. But their fortune has made them a target, and when a dangerous billionaire sets out to destroy them, Lee and her friends decide they’ve had enough—they will fight back with all their power and talents. Lee’s magic is continuing to strengthen and grow, but someone is on to her—someone who might have a bit of magic herself. The stakes are higher than ever as Lee and her friends hatch a daring scheme that could alter the California landscape forever. With a distinctive young heroine and a unique interpretation of American history, Into the Bright Unknown strikes a rich vein of romance, magic, and adventure, bringing the Gold Seer Trilogy to its epic conclusion. -Goodreads

Carson’s Girl of Fire and Thorns trilogy is my all time favorite teen fantasy series, and I have to say, even though the Walk on Earth a Stranger and Like a River Glorious leaned more towards historical fiction than fantasy, I enjoyed them immensely. This author writes amazing characters, compelling plot lines, and completely immerses her readers into her stories. I have no doubt Into the Bright Unknown will be a stellar conclusion to this great series. 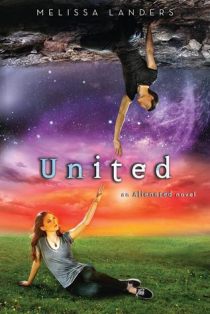 The Overview: After thwarting a deadly coup and saving the alliance between their worlds, Cara and Aelyx have finally earned a break. Their tiny island colony is everything they dreamed it would be―days spent gathering shells on the beach and nights in each other’s arms. But the vacation is short-lived. The treaty between Earth and L’eihr has awakened an ancient force that threatens to destroy them all. The Aribol, mysterious guardians charged with maintaining interstellar peace, deem the alliance a threat to the galaxy. They order a separation of the races, decreeing humans and L’eihrs must return to their own planets within the month or face extinction. In fact, they already have agents in place on Earth, ready to begin… -Goodreads

Alienated has to be one of my favorite YA books. It was sweet, charming, creative, funny, and an all-around feel-good story (imagine if Rory Gilmore hosted an alien exchange student – delightful, right?). Invaded was just as good, and I honestly wish the wait hadn’t been so long between it and United, as it kind of stole my momentum and excitement (that’s what I get for hounding for early copies, I suppose). At any rate, while United was an enjoyable end to the series, it didn’t blow me away quite like its predecessors.

Some of the things I found charming in the first two books struck me as a bit silly in United. I imagine a lot of that had to do with the fact that United was the only one I listen to on audio. The narrator made the aliens sound unintelligent and immature, which sapped a lot of my enjoyment from the story. “Cheesy” is the word I’m searching for. It was cheesy.

There were also a lot of things I accepted in the first two books that didn’t work for me in the third. The idea that a teenage girl could have so much political power and all of the government resources of earth took a backseat while her and her boyfriend fought an earth annihilation threat by themselves was… stupid. It screamed YA logic like crazy and left me feeling disappointed (and old).

Perhaps I’m just cynical. And perhaps I’m a little burnt out on YA in general. I’ve definitely been craving the more robust storytelling of adult novels lately. It certainly doesn’t help matters that I just finished Corey’s Babylon’s Ashes – a killer space opera series with loads of politics and moving parts (also one of the best series I’ve ever read). No, I’m sure that didn’t help at all.

The positive take away from United was how much I liked the sweet romance that blossomed throughout the trilogy between two really great main characters. Aside from the weird circumstances surrounding my experience with United, I still am a fan of Melissa Landers as an author and I’m looking forward to diving into her Starflight duology. Overall, if you like YA science fiction at all, Alienated is a must-read.

These Broken Stars by Amie Kaufman and Meagan Spooner

Across the Universe by Beth Revis

The Overview: The Handmaid’s Tale meets Blood Red Road in Glass Arrow, the story of Aya, who lives with a small group of women on the run from the men who hunt them, men who want to auction off breeding rights to the highest bidder.

In a world where females are scarce and are hunted, then bought and sold at market for their breeding rights, 15-year old Aya has learned how to hide. With a ragtag bunch of other women and girls, she has successfully avoided capture and eked out a nomadic but free existence in the mountains. But when Aya’s luck runs out and she’s caught by a group of businessmen on a hunting expedition, fighting to survive takes on a whole new meaning.

I was warned about this one. One of my favorite book bloggers posted a review explaining why she did not enjoy this novel… and I read it anyway. To be fair, I’d already been approved for a digital arc, so I was kind of already committed to reading it, underwhelming review or not. It turns out, my fellow book blogger was totally right… this was not a very strong book.

I really love the idea for it – women living in the wilds, on the run from hunters who’s goal is to capture them and sell them to the city as breeding stock. You see, evidently the women who live in the city are incredibly infertile, so the wilds women are high commodities. I thought it sounded fascinating, and reminded me of some of the other similar books I’ve read and loved recently (Wither by DeStefano, The Jewel by Ewing), but it just did not deliver. All of the books in that specific sub-genre require a bit of the “just go with it” attitude, but the plot structure and world building for this one just had so many things wrong with it that it was hard to read. For every rule she gave on how the society functioned, I could think of a couple of reasons why it wouldn’t work. And the thing is, I wasn’t actively looking for inconsistencies, they were just so blatant that my brain couldn’t help but point them out.

It wasn’t just the illogical nature of the plot that took away my enjoyment of the book (although that was the main thing). I also thought the book suffered from poor pacing and a bit of repetition. I don’t think there were enough plot points to sustain an entire novel and probably would have liked it a lot better had it been a short story. The plot points that were there still have me a bit perplexed – very little of the story had anything to do with the overall arc and climax of the book. It almost felt like I was reading three different books in one (or short stories –  bam!) and none of them related to each other very well… It was weird.

Eventually I got fed up and just started skimming during the last fifty pages of the book. But I did finish it, which I thought ironic considering how many issues I had with it. It made me go back and really think about what compelled me to keep going. It wasn’t what the author was writing, but rather how she was writing it that kept me reading. I enjoyed the style and thought Simmons had a lovely voice. She made me care about the main character and I had no trouble immersing myself into her perspective. I would love to see this author tackle something that requires a lot less world building and concept so she could focus on the element that, in my opinion, she does very well.

Overall, I was really underwhelmed by this title and it was a bit of a struggle to get through it. I was really excited about the concept and the writing style, but don’t think it ever lived up to its potential. I don’t see myself hand-selling this one anytime soon. Maybe it’s just me though – go check out the “this is her best book yet” five-star reviews on goodreads before making any rash decisions. ;)