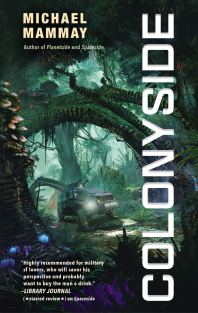 The Overview: A military hero is coming out of disgrace—straight into the line of fire… Carl Butler was once a decorated colonel. Now he’s a disgraced recluse, hoping to live out the rest of his life on a backwater planet where no one cares about his “crimes” and everyone leaves him alone. It’s never that easy. A CEO’s daughter has gone missing and he thinks Butler is the only one who can find her. The government is only too happy to appease him. Butler isn’t so sure, but he knows the pain of losing a daughter, so he reluctantly signs on. Soon he’s on a military ship heading for a newly-formed colony where the dangerous jungle lurks just outside the domes where settlers live. Paired with Mac, Ganos, and a government-assigned aide named Fader, Butler dives head-first into what should be an open and shut case. Then someone tries to blow him up. Faced with an incompetent local governor, a hamstrung military, and corporations playing fast and loose with the laws, Butler finds himself in familiar territory. He’s got nobody to trust but himself, but that’s where he works best. He’ll fight to get to the bottom of the mystery, but this time, he might not live to solve it. -Goodreads

When Michael Mammay publishes a new book, I am so there. His writing, characters, and plots have drawn me in like few others, and Colonyside was no exception. I’m thrilled to have another Planetside novel to add to my collection.

Butler’s character profile is one of my favorites. His no-bullshit attitude is incredibly appealing (for the same reasons I love Corey’s Avasarala from the Expanse series) and I appreciate that his character seems to have grown and adapted a bit since the first book. I LOVE how analytical he his. His perceptions of the world and how other people tick is a constant through-line of the series. Psychoanalyzing people’s motives is something that always fascinated me, and he takes it one step further by using that analysis to influence and manipulate to get the outcomes he wants. It’s extremely satisfying. Because I’m so enamored with it, I eat up every page, but I could see how that constant evaluation might get a bit repetitive for other readers. It certainly worked for me though.

Of the three Planetside novels, this one was the most relaxed, probably because the stakes weren’t as high. But I didn’t mind that because the plot was fast-moving and the mystery interesting. The first two books had a fantastic payoff at the end (shocking me out of my seat), but this one lacked a bit of that for me, mostly because I predicted where it was going. I missed that element of surprise, but other than that really got into the characters, the setting, and the politics.

Recommendations: Planetside is one of my all-time favorite scifi novels and a very high recommend for any fan of the genre. The audio version is superb – R.C. Bray’s performance really elevating the character (my full audio production review is available on AudioFile.com). I enjoyed it so much I endorsed it for an Earphones Award. The series continues to delight and entertain me with each installment and I’m hoping it’s not the last we’ll see of Carl Butler.

I’d like to thank Avon and Harper Voyager, Netgalley, and Michael Mammay for the chance to read an early copy of Colonyside!