If you liked: Moon Called by Patricia Briggs…

Shifters was an incredibly absorbing series that I can still remember vividly years later. The first books is weakest, but the rest of the series boasts great character development, world-building, and overall story. This is my first pick for fans of the Mercy series. (MA: sex and violence) 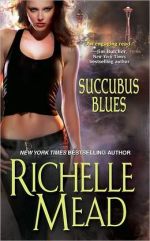 One of my favorite authors, the Succubus series will knock your socks off! Fantastic character-driven story that also manages to build an interesting magic system while following a great story-line. I read these back to back – I haven’t done that with a series since grade school! (MA: sex and language) 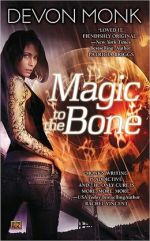 Title: Magic to the Bone

This series has a strong concept and magic system, with a touch more grit than the mercy series. (MA: language (I think))

I picked these up after reading the author’s Morganville Vampire novels, and I have to say, it’s a highly original urban fantasy. For me, it had the same overall feel as the Mercy series.

I love Kim Harrison!!! She is quickly creeping up my list of all-time favorite authors. It’s the series as a whole that makes me feel this way, and I wasn’t totally on-board until a few novels in. Now I can’t put them down! The similarities to Mercy here are great characters, great writing, and similar genre. (MA: sex and violence) Read full review

I’m recommending this one because, even though its science fiction, it reads more like an urban fantasy. The characters made me incredibly nostalgic about Mercy, and it was one of the most entertaining series I’ve ever read. The world-building, at least in the first book, is probably its only flaw. (MA: Language/Sex/Violence) Read full review

For the longest time, this was my favorite urban fantasy. I love the cast of characters, I love the plot, and I love how sexy it is. Definitely for mature audiences only (sex, language, and violence) 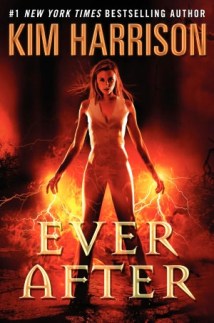 As mentioned in a post for book #1, “Dead Witch Walking”, Kim Harrison is my go-to author for excellent urban fantasy. I love this series, and can’t wait to find out what happens next! January can’t come quick enough this year. :)

The Overview: Some wounds take time to heal…and some scars never fade.

Rachel Morgan, kick-ass witch and bounty hunter, has taken her fair share of hits, and has broken lines she swore she would never cross. But when her lover was murdered, it left a deeper wound than Rachel ever imagined, and now she won’t rest until his death is solved…and avenged. Whatever the cost. Yet the road to hell is paved with good intentions, and when a new predator moves to the apex of the Inderland food chain, Rachel’s past comes back to haunt her. Literally.

As I’ve mentioned before in a review of the first book, “Dead Witch Walking,” Kim Harrison is my go-to author for urban fantasy. After finishing this seventh book in the series, she’s still going strong and, if anything, gotten better.

The intrigue and suspense in this particular novel are great. Not only is Rachel trying to help in a case involving an aura-stealing banshee, but she’s also dealing with an ornery demon AND trying to solve a murder case at the same time. As you can see, there are multiple arcs to the story, ones that Harrison manages to blend together seamlessly.

She is also good at delivering great relationships, and not necessarily in a romantic sense. The main character’s friends, acquaintances, and even enemies are what keep the story fresh and vibrant for me. I’m reading to find out how their stories play out, too!

Overall, these books are highly entertaining and memorable – the type you can set down when you’re busy then pick up weeks later without skipping a beat. They’re also incredibly clever – I laugh out loud at least a couple times every time I read them!

The Overview: Creatures of the night gather in the Hollows of Cincinnati, to hide, to prowl, to party, and to feed. Vampires rule. Bounty hunter and witch, Rachel Morgan keeps that world civilized. With serious sex appeal and an attitude, she’ll bring ’em back alive, dead, or undead.

You might have noticed that I include five recommends with each of my reviews. When I’m considering which ones to choose, “Dead Witch Walking” somehow always comes to mind. It has long been a series that I pick up when I’m in the mood for a “solid” read. Not only is it one of the best urban fantasies on the market, it is also an exception example of many of the things I value in a book: fantastic character development, great world-building, an element of cleverness or humor, a love interest, and an engaging storyline. Harrison has become the ultimate go-to author for great urban fantasies.

Since books of this genre are often set in familiar cities during the present day era, you would think world-building aspects would be simple. Well, Harrison doesn’t do anything halfway. She gives us an urban fantasy set in the future where half of humanity has been decimated by a genetically engineered virus. Rachel Morgan, a feisty redheaded witch, is just trying to make a living in this alternate society of interlanders (the supernatural beings). Forever a magnet for trouble, she gets herself into one mess after another that requires a lot of wit and charm to get back out.

Although this series is not particularly fast moving, it is so character-driven that I was completely absorbed nonetheless. Totally engaging, there is not a single character that I didn’t like. Harrison is a master at creating dynamic and interesting characters – and for me, they are unforgettable. If that wasn’t good enough, she is also the official queen of sidekicks! I’ve yet to read a series in any genre that had such great companions for the protagonist. They really added a lot of fun to the story!

I have no complaints – I absolutely loved this series!