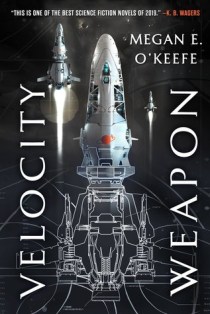 The Overview: Sanda and Biran Greeve were siblings destined for greatness. A high-flying sergeant, Sanda has the skills to take down any enemy combatant. Biran is a savvy politician who aims to use his new political position to prevent conflict from escalating to total destruction. However, on a routine maneuver, Sanda loses consciousness when her gunship is blown out of the sky. Instead of finding herself in friendly hands, she awakens 230 years later on a deserted enemy warship controlled by an AI who calls himself Bero. The war is lost. The star system is dead. Ada Prime and its rival Icarion have wiped each other from the universe. Now, separated by time and space, Sanda and Biran must fight to put things right. -Goodreads

Overall, Velocity Weapon was an entertaining read. Probably in the upper half of scifi novels I’ve read lately. It’s very character-driven and political, involving two worlds on the brink of war. I appreciated the slightly more complex ideas and thought the non-human characters were handled especially well. I also liked the initial suspense – it had a lot of interesting and dynamic plot points to keep the pages turning. If I can say nothing else about the book, it was consistent from start to finish…

… which may have been why the novel ultimately left me feeling underwhelmed.

I definitely don’t mind a slow-burn plot that takes a while to unfold all of its mysteries. I do mind, however, when that slow burn doesn’t eventually escalate, as was the case with Velocity Weapon. It kept the same plodding pace through the entire novel when everything about the story supported a careening finish. Unfortunately, the height of interest for me hit at about the halfway point and never really went back up from there.

The good news is, at least it was consistently good. If you like the book right from the beginning and know what to expect, chances are you’ll continue to like it well into the second novel.

Series status: I set down the second book in favor of other series I was more impassioned about. However I can see myself picking it back up eventually because the series is written well and has a lot of merit.

Recommendations: pick this scifi up for a slow-burn, character-driven political novel.

To Sleep in a Sea of Stars by Christoper Paolini

The Cruel Stars by John Birmingham